The mystery of Thomas Strong at the Taku Forts

Whilst visiting the Taku Forts museum recently I came across a British tombstone. I've been unable to identify anything about the individual concerned - 'Thomas Strong'. Since then I've been in contact with the Director of the museum - Ma Wenyan. This is what she has to say;
"The ‘Thomas’ tomb stone was excavated from flat ground ten meters away from the south side of the ‘Hai’ character on the southern shore of the river in the Dagu area. The exterior of the tombstone is made of cement and rubble. It is certain that Chinese people did not erect this tombstone. Chinese burial consists of standing stones.
Earlier, Dagu area was salt swamp. We speculate that this tombstone might be transferred to Dagu Fort by ship or through land. In 1858 when Anglo-French Allied Force attacked Dagu Fort, there were a large number of casualties. Historic pictures from abroad show that French troops once held cemetery for the dead soldiers in the northern fort.
Whether the southern forts or the northern ones, it is beyond question that soldiers killed in the battle were buried there. At that time, except for the forts there were no good sites for burial apart from the high ground occupied by the forts. The lower ground was muddy and swampy. 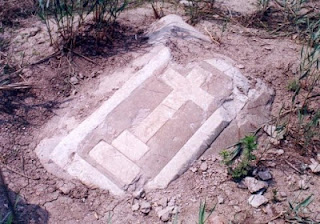 As to the sources of cement of the tombstone, we speculate that Thomas died in a battle or of a disease on a ship during the Second Opium War, and that the cement used in his cemetery surely came from the ship. Since China of that day had not capability of cement production, and the earlier production of cement can be dated back to 1882 when Westernization Movement introduced it into China. In 1824,”Portland Cement” of Britain obtained the patent certificate. If Thomas died in 1900 when the Eight-Power Allied Forces intruded China, the cement that made the base of the tombstone might be produced in China and probably came from Tangshan, Hebei Province.
Because the stone is worn it is impossible to make out birth or death dates. Usually one stone is solid enough for a tombstone to last many years. But actually this one was imbedded in cement and surrounded by strips of stone. It is inexplicable to waste time and effort on such work in war time."
If anyone can help solve this mystery Ma Wenyan and I will be very grateful.
Posted by Curmo at 22:32