It might initially appear odd to start a tour of the American Civil War's Mississippi battlefields in Washington DC. However it is here, in a prime position in front of the United States Capitol, that
the veterans of the Army of the Tennessee decided to erect a spectacular monument to the man who lead them so effectively through 1863 - the critical year of the war. Ulysses S. Grant sits astride his horse gazing in the direction of the Lincoln Memorial flanked by equally dramatic representations of Federal cavalry and artillerymen.

The Mississippi river was a vital communication artery for the CSA. Winfield Scott's Anaconda plan envisaged the Yankee army taking the Mississippi river from top to bottom thus severing the Confederacy in two. However in the spring of 1863, notwithstanding the fall of New Orleans in the previous year, the Confederate Army had a tight grip on the middle reaches from Port Hudson in the south to a point up and beyond Vicksburg - about 250 miles downstream from the city of Memphis.

Grant, then commander of the Army of Tennessee, had made repeated attempts to open up the river to Union traffic. Set-piece attacks on Confederate positions in the north had been costly failures and an attempt to build a canal so as to bypass Vicksburg had been a fruitless endeavour. His decision to sail a flotilla of steamships with a major part of his army onboard to a point downstream of the city and then launch an amphibious assault caused consternation amongst many of his contemporaries. The ships would have to run a gauntlet under the sights of the CSA batteries on the Vicksburg heights and, once landed, his men would have no line of supply - the army would need to subsist through requisition and confiscation.

The run down-river went well and first contact with the Rebel Army came in the settlement of Port Gibson where the batteries at Fort Coburn were well placed to disrupt river traffic. After landing, Grant once again confounded Confederate expectations by setting out for Jackson rather than moving straight onto Vicksburg. The road and rail links through Jackson were the only means by which Pemberton's 60,000 strong army in Vicksburg could be resupplied.

Local Confederate formations flowed back into Vicksburg and the city settled into a state of siege - a trial for civilians and soldiers alike. Most of the battlefield has been beautifully preserved with the siege lines facing out to fortified Federal positions. Recently much of the tree growth has been cleared so that the visitor can discern the gullies and hills which characterise the local topography.


Grant's Army made repeated attempts to breech the Confederate lines but to no avail. Losses on both sides were severe and so Grant reconciled himself to a formal siege. On July 3 1863, after forty six days of severe depredation for the defenders, The Confederate General Pemberton met with Grant to discuss surrender terms. On July 4 1863, Vicksburg officially surrendered and Grant's reputation as a military leader was made.

Five days later Port Hudson, 130 miles to the south, surrendered - the Mississippi was opened up to Union river traffic and the Confederacy was severed. "The father of waters," said President Lincoln, "again goes unvexed to the sea".

The Port Hudson battlefield is a difficult site to read. The Mississippi now takes a slightly different course and so the old fortifications are effectively landlocked. Furthermore the area is heavily wooded so it is almost impossible to get a bearing on what the area looked like at the time of the American Civil War.

As most readers will know, following the successful Vicksburg campaign, Grant was eventually given command of the Federal Army and his leadership was the key to the North's victory. It is perhaps ironic that the reputation of this gifted commander, who achieved so much, is often unfairly overshadowed by that of his opposite number whom Grant outfought in the Eastern campaign - Robert E. Lee.
Posted by Curmo at 15:53 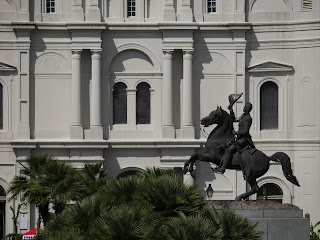 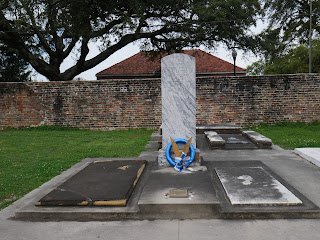