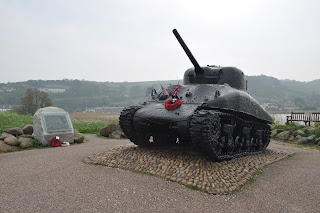 Afterwards the survivors were sworn to secrecy. Earlier the village had been evacuated with some 3,000 residents moving elsewhere. News of the tragedy was released in August 1944 but only after the recovery of the bodies of ten officers where there was a particular sensitivity because of their knowledge of D-Day plans. 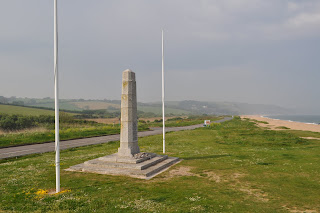 At the opposite end of the beach there is a striking memorial erected by the United States Army Authorities 'to the people of South Hams who generously left their homes and their lands to provide a battle practice area for the successful assault in Normandy in June 1944'.

An interesting footnote to the story is that one of the original E-boats involved in the attack is currently being restored at Southdown in Cornwall. Incredibly the boat saw extensive service after WWII - eventually being decommissioned from the Kriegsmarine in 1991. The restoration is being funded by Kevin Wheatcroft (an individual with a passion for restoring WWII relics).
Posted by Curmo at 08:09