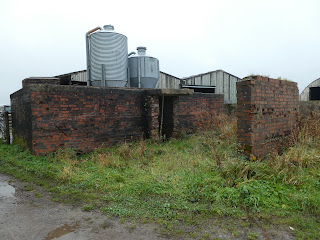 The Fortified Island of Flat Holm

From 1870 to 1900 the Severn Estuary was protected by four interlocked forts - Brean Down, Lavernock Point, Steep Holm and Flat Holm. Later, during the Second World War, these sites were redeveloped and brought back into use. Nowadays all of these sites can be visited, and each one is unique and of special interest. Last month I managed to get to Flat Holm Island, the journey itself was a bit of an adventure in that the only way of getting there is in a rib running out of Cardiff Bay.

In Victorian times there were four batteries on the island: Lighthouse, Well, Farmhouse and Castle Rock. Because of the relatively low and exposed terrain the nine 7" Rifled Muzzle Loading (RML) guns deployed on the island, were all mounted on Moncrieff Disappearing Carriages. Many of the guns are still on the island, as they were difficult to salvage, but the carriages are long gone. The sunken gun pits are there to explore as are the tunnels, ammunition stores and the original 1869 barrack block (now a pub, small museum and visitor hub).

The quarters provided on the island were good for fifty men but generally the island was served by a Master Gunner and five lower ranks. The gun pits were constructed from limestone blocks and bricks - they are 18 ft in diameter and 10 ft deep. When firing their 115-pound shells, the recoil forced the gun into the down position (see illustration above). It was then reloaded and, with the aid of a counter weight, raised ready for firing again. The guns were only fired in tests and in 1888 the R.A. and R.E. Works Committee recommended that a number of the guns be replaced with a 6" breech loading (BL) gun and two 3" quick firing (QF) variants. These upgrades never happened.

During what is sometimes referred to as the 'second military occupation' from 1940 to 44, over 350 soldiers were based on Flat Holm. Two anti-aircraft (AA) batteries were established, both consisting of two heavy, 4.5" AA Mark II guns, a command post, and were flanked by two searchlights. Bofor and Lewis guns augmented the AA armament. The batteries were constructed from mid 1941 and throughout 1942 - sometime after the main raids on Cardiff and Bristol between October 1940 and May 1941.

The pictures of Farmhouse Battery above, illustrate the strategic value of Flat Holm Island. The coastline in the distance is the Weston-super-Mare / Sand Bay stretch of Somerset shoreline, defended by the fort at Brean Down. Steep Holm Island can be seen in the second picture. The main deep water channel up to Bristol and into the Severn Estuary runs between the islands.
We can garner some idea of what the batteries were like in the wartime years through the work of war artist Ray Howard-Jones (1903-96). After being accredited as an official war artist Penarth based Ray spent several months on Flat Holm and Steep Holm in 1942, leaving a rich legacy of contemporary paintings. The painting below, showing two newly installed A.A. guns is reprinted with the kind permission of the National Museum of Wales and Nicola Howard-Jones.
Flat Holm became non-operational in December 1944 and in 1945/6 German prisoners of war removed most of the equipment and many of the pre-fabricated structures. Aside from the batteries, ammunition stores, control bunkers and searchlight positions visitors can explore the remains of a G.L. Mk II radar platform and ramp, plus a number of other wartime structures such as the old gas attack store and guard house.

As is the case with Lavernock, Brean Down and Steep Holm it is interesting to see how Victorian fortifications have been reused in later conflicts. The sites chosen in the 1860s and 70s remained relevant in later times and although the gun pits required a radical new approach, some of the other buildings were re-used. The picture immediately above shows an open-backed Moncreiff gun position at Well Battery on Flat Holm, with a 1941 era structure built where the original Victorian artillery piece was originally mounted.
Main References
'A History of Maritime Forts in the Bristol Channel' by J.H.Barrett
'Flat Holm Island: Rich in wildlife, steeped in history' from Cardiff City Council
Bay Island Voyages: https://www.bayislandvoyages.co.uk/
Posted by Curmo at 12:44