"What is this?" said the Russian border guard at Moscow's Domodedovo International Airport as he extracted a large lump of metal from my suitcase. "I think it's part of a tractor, or something ....." I rather weakly replied. Luckily the queue behind me were very keen to get through airport security and the Russian official opted for the easiest option - and nodded me through. The piece of track from a T34 tank picked up at Prokhorovka is now proving to be a very effective paperweight.


Prokhorovka is remembered as the largest ever tank battle. In the collective Russian memory it was the turning point of the Battle of Kursk when the infamous Liebstandarte II SS Panzer Division was stopped in it's tracks. This point of view is immortalised on the battlefield in the form of the iconic Prokhorovka Bell Tower and the recently installed art works in front of the impressive local museum.

The truth is somewhat different although the phenomonal achievement of the Red Army in thwarting the double fronted Axis thrust at Kursk should not be under-emphasised. We were joined by a leading expert on the battle - Professor Valerie Zumulin. Valerie's research reveals that the turning point of the battle was at Ponyri Station in the north when Model's XXXXI Panzer Corps were fought to a standstill by Soviet 13th Army. The Battle of Prokhorovka was concerned with the Soviet 5th Tank Army's counter thrust against Hausser's II SS Panzer Corps with the Liebstandarte in the defensive vanguard.


We started our day of battlefield walking on the top of Hill 258.2 on the 3rd defence line about three kilometres south of Prokhorovka. Beyond the third line was the flat ground where the German tanks could be made ready to receive the imminent Soviet counter thrust. On the 10th July seventy five Soviet defenders held out against the lead German tanks for an astonishing six and a half hours.


The flat ground south of Prokhorovka  - just to the west of the modern road and the Belgorod to Kursk railway line was the deployment position for the Liebstandarte's seventy tanks and self propelled guns (Healy has II SS Panzer Corps fielding a total of 294 tanks and self propelled guns on the 12th July - p.20, 'Zitadelle: The German Offensive Against the Kursk Salient 4-17 July 1943').

The Soviet reserve 5th Tank Army (with, by Healy's reckoning, 830 tanks and self propelled guns) was poised to the north (three and a half kilometres from the modern day Bell Tower). One of the Soviet observation bunkers has been reconstructed and the roof of this bunker gives an excellent viewpoint over the flat open fields were these two echelons of tanks and armoured vehicles clashed.


The scene in this area on the 12th July is dramatically captured in the superb Belgorod Panorama. A useful stopover and orientation if, as we did, you arrive in the Kursk area by overnight train from Moscow. 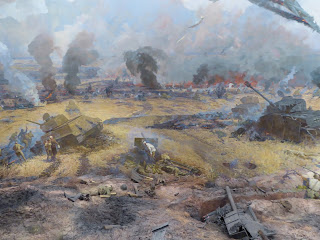 We undertook three walks on the Kursk southern front. This one, the Psel Bridgehead which can be read here and the route taken by Army Detachment Kempf to the east (which will be covered in my next update). The northern front and the subsequent Soviet Kutosov offensive will be covered in future entries.