The Battle of Anzio started with an amphibious attack (Operation Shingle) on 22 Jan 1944. A lack of aggressive spirit on the part of the attacking force and a highly energised reaction from the German commander, Field Marshall Albert Kesselring, meant that despite initial Allied success the bridgehead was penned in by eight German divisions within a matter of days. Winston Churchill famously remarked that I had hoped to that we were hurling a wildcat onto the shore, but all we got was a stranded whale. The American commander, Major General John P Lucas, was relieved of his command  a few weeks later having, in the meantime, overseen the successful rebuttal of a major counter attack by the German 14th Army.


The initial assault on Anzio town was spearheaded by the U.S. Rangers and the U.S. 504th & 509th infantry battalions. The photo above shows the town beach as it is now. The harbour is just beyond the promontory. In contemporary photographs one can see the massive tank landing ships discharging vehicles onto the beach and helpfully there is a superb model of one of these craft in the Anzio Landings Museum. The U.S. 3rd Division landed to the east of nearby Nettuno, which like Anzio, was captured on the first day. The British 1st Division and 3rd Brigade along with a Canadian regiment landed to the north of Anzio and were equally successful as far as the initial disembarkation was concerned.

On this road-trip our battlefield walking group was concerned with the 56th (London) Division who reached the Anzio Bridgehead on 18 February 1944, disembarking in the main harbour. They'd set out from Bagnoli, Naples three days earlier. Our visit to this busy commercial harbour was an interesting one - including a rather bizarre barter transaction where the purchase of five pairs of socks gave us a prime parking spot next to the fish market!

The last major action that the 56th Division were involved with during this stage of the campaign was the opposed crossing of the River Garigliano at the extreme western end of the German Gustav Line.

In walking the river bank we concentrated on the actions of the 56th Division's 167th Brigade which was made up of the 8th & 9th Battalions of the Royal Fusiliers and the 7th Ox & Bucks Light Infantry. Surveying the northern river bank we could clearly see the high ground held by the German defenders.

The 9th royal Fusiliers crossed the river near a demolished railway bridge and after orientating ourselves were able to find the old bridge stanchions. On the far side of the river at Maiano Di Spora one of our party, Jim Baldwin, was able to stand on the spot where his father, an artilleryman, had won a Military Medal for his bravery whilst maintaining communications from a forward O.P. with the 65th Field Regiment who were shelling targets south of Castelforte. Unsurprisingly this was one of the highlights of our roadtrip.

Upon reaching Anzio we sought out a site that had been featured in the always excellent After the Battle magazine. This was the last pillbox of the Anzio-Nettuno seafront defences which was converted into an artwork by the sculptor Amerigo Tot in April 1976. The ATB team caught a team of construction workers beginning to make the modifications and the ATB cover photo is reproduced below along with two of our party in a much later shot. The 'artwork' is now in a very sorry state. 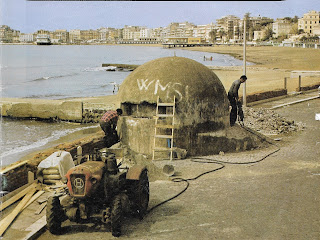 The flyover at Campo Di Carne is a major feature of the battlefield and the fighting in this area was intense during the German counter attack 16-20 February, 1944 and afterwards as the Allied troops sought to take the town of Aprilia (known to the troops on the ground as 'The Factory').

The striking aerial shot on the right was taken shortly after the attack had been held and a smashed tank can be seen just to the right of the Via Anziate which runs underneath the bridge. Nowadays the area is heavily industrialised and there is a busy railway station nearby.

As we were investigating the environs we came across a road sign pointing the way to The British 'Waters Memorial'. Intrigued we set off to find it - with some difficulty it must be said. I'm glad we took the trouble because, being a fan of Pink Floyd, I was astonished to find that one of the groups' founders, Roger Waters, had taken the trouble to locate where his father was killed in action on 18 February, 1944 and had erected a poignant little memorial and a really useful information board.

2nd Lieutenant Eric Fletcher Waters served with 8th Battalion (City of London) Fusiliers. He and his wife Mary had two sons the youngest of which was Roger. Roger's father was killed when he was just five months old and Pink Floyd's album The Final Cut (which I'm listening to on Spotify as I write this) was dedicated to him.


The 56th Division was withdrawn from the Anzio Bridgehead and returned to Egypt on 28 March 1944 where they were refitted - returning to Italy in July 1944 in time to offer a royal salute to King George VI at a victory parade on the 30th of that month.