Driving past the huge Soviet War Memorial and then around the Brandenburg Gate, we turned into the Unter den Linden and passed the huge edifice of the Soviet Embassy. As we drove on I thought of Von Greim's final dramatic flight into Berlin prior to the fall of the capital to the Russians in April 1945. Hanna Reich taking the controls of a storch, and landing the light aircraft on the road which we were now travelling down. This seemed as good a place as any, to begin our trip to the River Oder to explore the battlefield area of the Seelow heights. So - we sped down Highway 1, past the Orwellian skyline of the Karl Marx Allee and within an hour were in the town of Muncheburg. 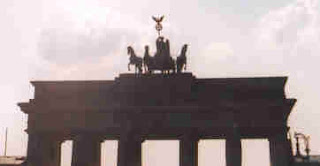 I had judged this place to be the Western edge of the area that we were interested in. Travelling through the town and following the highway East, one passes Jahnsfelde where the "Muncheberg" Panzer Division blunted (but failed to stop) the Soviet Advance with a counter attack on April 18th 1945.

Seelow was smaller than we had expected. Entering the town from the West we stop at a small military cemetery and notice a row of small signs, marking the graves of about fifty German personnel, a good number of whom seem to be from the 76th Panzer Grenadier Division. Driving through the town, we reach the Eastern boundary and it is immediately apparent why this spot was so strategically important in the early months of 1945. The town lies at the top of an escarpment with the Oder valley at the foot and beyond. From the Eastern boundary of the town one could have easily observed the Soviet Forces assembling in the Kustrin Bridghead, some five miles in front. 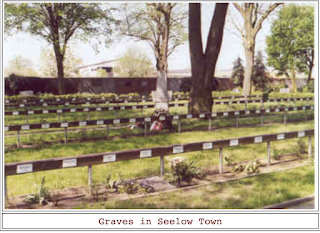 Just beyond the Eastern boundary of the town lies the Soviet War Memorial. A Guardsman standing astride the sculpted turret of an early panzer tank. At the foot of the Seelower Hohen Memorial there is a Soviet War Cemetery which contains about thirty individual graves, each marked with a name and a Soviet star. One grave is adorned with a photograph. Adjacent to this there is a grassed area with several vertical commemorative stones, covered in Russian writing. The view from this spot is impressive. A near vertical drop and then the flat expanse of the Oder Busch. One can't see the River but one can sense its' presence.

Back to the town centre for a beer and then we drive along the Heights to the South, following the line of the Ridge. Evidence of hard fighting is everywhere. Pockmarked buildings and derelict properties. We pass by the ruins of a church at Delgelin and stop briefly to examine a local Memorial, commemorating those lost in an earlier conflict. A "coalscuttle" helmet atop a laurel wreath. 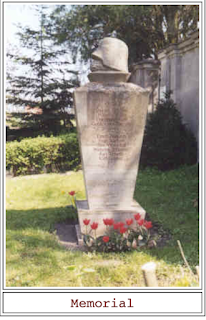 We drop down the Ridge and cross the line delineating the extent of the initial Kustrin Bridgehead. A spot of fieldwalking reveals no signs of the Battle, that took place. The Russians lost about 760 tanks and armoured vehicles in a few days of fighting.

On the right the horizon is dominated by the Reitwein Spur. This was the only piece of high ground held by the Russians prior to the 18th April 1945 and we were keen to find evidence of Russian field works in this strategically important part of their line. On the outskirts of Reitwein Village, at the foot of the spur we find the grave of a lone Wehrmacht soldier, in the shadow of a blooming fruit tree.

Reitwein church is roofless and covered in indentations from artillery and small arms fire. Builders were at work refurbishing the bell tower. A crude sign pointed towards a path - "Shukow - Befehlsstand 1945". We park the hire car next to a large Soviet Cemetery. The stonework on the Memorial is unkempt and decaying but there is evidence that someone is attending to the grounds. 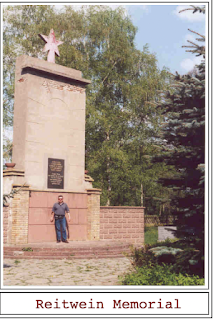 The path leads up towards the Heights and eventually we find the twin entrances of Chuikov's command bunker. I had already discovered (thanks to Tony Le Tissier - Then and Now) that the entrances had been blocked but nevertheless the site is very evident. As we examined this area, we discussed the topography of this part of the Battlefield. We concluded that Chuikov would most certainly have placed observation points on the highest part of the Spur. So - we left the path and climbed up through the woods, heading for the highest point whilst remaining within the area behind the original Russian front line. 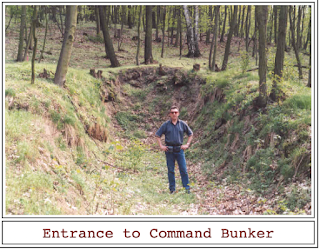 At the top we were rewarded with one of the most interesting finds of the day. The ridge of the Heights is reworked into a series of "foxholes". Forward observation posts linked by trenches to larger posts slightly to the rear. Further trenches led down the reverse slope to a series of storage positions. One could discern the whole position, walking via trenches from post to post. The Spur is covered in trees now - saplings growing out of stumps. But one can still see the view below.

The plain spread out in panoramic view with the Heights beyond. I thought about what the view might have looked like at 0530 hours on the 16th April 1945. 140 searchlights backlighting the advancing T34s. the 88s on the Seelow Heights beyond barking the defenders response.

We wanted to see the River so we left Reiwein and headed down into the valley. The River was swollen and as I stood on the Western Bank looking at Poland on the far shore, I reflected on the role that weather often plays in battle. If elements of the 1st Byelorussian front had not managed to pass over the partially frozen River in January 1945, then the Bridgehead would not have been available for the assembly of assault troops as a precursor to the final assault on Berlin.

We drove along the River, crossing the Seelow/Kustrin Road and negotiating the tiny cobblestone roads of the Oder Busch. The terrain was flat and marshy. One could imagine vehicles being easy targets for artillery on the dyke top roads. We drove down to the spot where Koniev's forces first crossed the River.

The first tank to cross the Oder is mounted on a concrete plinth in the market square at Kienitz. The inscription reads "31st January 1945 - Kienitz, the first place in our country to have been liberated from Fascism. Glory and honour to the fighting soldiers of the 5th shock army and the 2nd Guards Army". Travelling out of the village and down to the Riverbank we came to an incongruous steel monument. The inscription is partly defaced but according to Le Tissier it reads "The offensive demands a boundless mass of energy from us in order to bring the Fascist filth to an even quicker end". Not exactly Wilfred Owen! 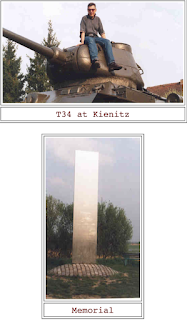 We drove back to Berlin stopping briefly for a beer at Letshin, Another Soviet cemetery held pride of place in the centre of this large and isolated village. Berlin - well …. my continuing description of our tour can wait for another day.
Posted by Curmo at 08:42