A few weeks ago my wife and I signed up to the National Trust during a weekend break in Northern Ireland. Keen to make the most of our membership we are in the process of visiting all of the the Trust properties in proximity to our home. Yesterday we travelled across the new Severn Bridge to the wonderful Tredegar House in Newport, Wales. Always on the look out for all things related to military history, my interest was pricked immediately by the field gun (originally belonging to the Glamorgan Yeomanry) which is situated close to the entrance.


Tredegar House is described by the Trust as one of the most significant 17th Century houses in the British Isles. It was used by the Morgan family (later known by the title 'Tredegar') for more than 500 years. The Morgan family owned more than 40,000 acres in Monmouthshire, Brecon and Glamorgan. One member of the family I was particularly interested in was Godfrey Charles Morgan, 1st Viscount Tredegar (1831 - 1913). At the age of 22, Tredegar was a Captain in the 17th Lancers and was heavily involved in the fighting around Sevastopol in the Crimean War. He was in action at the Battle of the Alma (as was my Great, Great Grandfather - but that's another story) and was in command of a section of the Light Brigade that rode into the 'Valley of Death' during the Battle of Balaclava.


There is a fabulous painting of Morgan and Sir Briggs in what is now known as 'The study' in Tredegar House (above). The Viscount survived the charge as did his horse 'Sir Briggs'. The horse had been transported to Russia from the Morgan estate in 1853. Sir Briggs saw action on the Alma, at Balaclava & Inkerman before spending a brief period of time afterwards as Frederick Morgan's staff horse (Frederick was Godfrey's elder brother). Having survived the charge Sir Briggs was eventually returned to Wales and is buried in the Cedar Garden at Tredegar House. As you can see from the photographs below it is still there.


The monument reads "In memory of Sir Briggs. A favourite charger: He carried his master, The Honourable Godfrey Morgan Captain 17th Lancers boldly and well at the Battle of the Alma, in the first line in the Light Cavalry Charge of Balaclava and at the Battle of Inkerman 1854. He died at Tredegar Park 9th February 1874 aged 28 years."

The house at Tredegar passed into the ownership of the National Trust last year and the fabulous contents are now accessible by the public. One of the treasures on view is the superb ceiling in the Gilt Room (through the front entrance and turn right). the mural on the ceiling has been restored to its former glory.


The restoration was necessary because on 2nd August 1980, during an air display, a Vulcan bomber flew low over the house and caused so much vibration that a number of ceilings cracked. The South Wales Argus quoted a local council official as saying that "in the rehearsal the bomber flew much higher than on the day". The emergency repairs cost the Ministry of Defence £5,000.

For details of my battlefield walks in the Crimea click here.
Posted by Curmo at 06:57

Update: A few years ago I posted a piece about the Normandie-Niemen squadron having stumbled across a museum at their old air base in Les Andelys a few years ago. Last month I visited Kaliningrad in Russia and found a memorial to the squadron in the centre of town. I've added a picture of the memorial to my original posting (top picture). 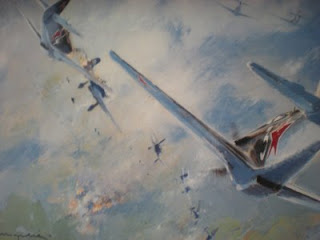 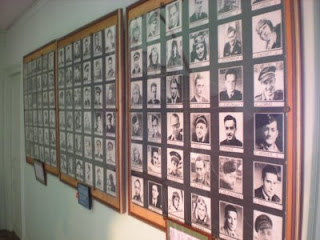 A day trip to Les Andelys brought an unexpected surprise last week. The town is home to the Normandie-Niemen Squadron Museum. Marcel Leferve, one of the pilots came from the town and when he died a few years ago, the museum was set up to commemorate his memory and that of the other brave Frenchmen who flew with the Russians on the Eastern Front. The squadron flew 5,240 missions and achieved 273 confirmed victories. Of the 96 pilots who fought, 42 never returned and are commemorated on the photo panel below. The Squadron still exists.

For the full photo set, click here.
Posted by Curmo at 18:58