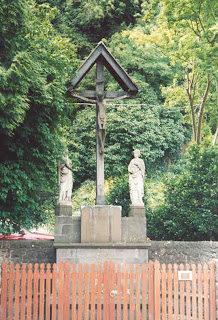 Dedicated by the bishop on July 27th 1918 in memory of the men who fell in the Great War 1914-1919.
"May they rest in peace"
Non Parishioners are indicated by the letters 'NP'
Second World War casualties are shown in Italics.
Alfred D BAKER

NP. Captain, 18th Battalion.,King's Royal Rifle Corps. (and TM B). Killed in Action 15th September 1916. Details of Burial or Commemoration Not Known.(No record held with CWGC).Also commemorated on the Roll of Honour at St Andrews, Clevedon.

NP. Major Alfred George Montague Norton-Harper. Kings Own Lancaster Regiment attached 4th Nigeria Regiment. Killed in action 16-10-1917 East Africa. Buried Dar Es Salaam War Cemetery Tanzania, Plot 6 Row H Grave 7. Major Norton-Harper, aged 42, the only son of Richard and Charlotte Norton-Harper, of 2 Eldon Villas, was killed in East Africa. He served with the King’s Own Royal Lancaster Regiment during the Boer War, after which he was appointed to repatriation work, and on completion of that, went to the British Consulate at Lourenco Marques, Portuguese East Africa. Upon his return home he was seconded from his regiment as District Commissioner in Nigeria. On the outbreak of war, being unable to rejoin his regiment, he became attached to the 4th Nigeria Regiment and served in the Cameroon’s. He refused the post of Political Officer to the Belgian forces, in order to serve with the troops in the field. Also commemorated on the memorial at St Andrew's. (Information provided by Rob Campbell).

31633 Private, 6th Duke of Cornwall’s Light Infantry ex 22488 Somerset Light Infantry. Killed in action 9-4-1917 France and Flanders .Buried No known grave Arras Memorial France Bay 6. Private James enlisted into the Somerset Light Infantry at Clevedon early in 1916. He was transferred to the Duke of Cornwall’s Light Infantry and went to France in July 1916, where his initiation to war was the Battle of the Somme. A keen footballer and chorister at St John’s. He married Jessie Higgins, of Clevedon, and was the son Mr & Mrs E James of East Clevedon. He was 27 years of age. (Information courtesy of Rob Campbell).

DCLI. Further Details Not Known.Also commemorated on the Roll of Honour at St Andrews, Clevedon.

The memorial which takes the form of a cross set in a walled enclosure has a holy water stoup and the base of the cross has the alpha & omega symbol inscribed. The names of the fallen are set in paving stones on the floor and sadly are falling into disrepair. Two names are already unreadable. The memorial (The Calvary) was restored in 1998 in memory of Christopher and Kathleen Woodland and Patrick Burman, priest and chaplain to the forces.