Nikita Khrushchev blew my house up: Recollections of the Bedenham ammunition explosion (July 14, 1950)

Recently I took a walk on the waterfront at Wicor, Portchester where, according to my father, the Soviet Union had sabotaged a barge unloading ammunition at Bedenham Pier - on the opposite side of the bay. It's an interesting spot with various wrecked and beached boats lying on the foreshore. The picture below shows a Second World War era concrete barge with the Portsmouth skyline behind (Spinnaker Tower on the right. 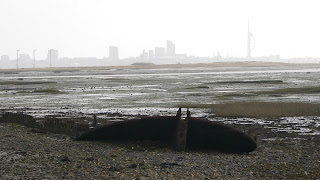 My father tells the story: "We were living in Wicor at the time. Mum and I were at home and we heard these popping noises. After awhile we were warned to stay inside and away from windows. The popping increased and soon I saw saucer shaped holes appearing in the garden. They were 16 inch unfused shells landing all around us".

"The house was very badly damaged. Only one room was habitable and I remember my father coming home on the bus from his workplace in Napier Road, Southsea half expecting to find total devastation. He was relieved to find us safe".

"In the morning I took our dog down to the beach for a walk. The foreshore was covered with bits of wood from the destroyed barges and the wrecked pier. Someone told me that ammunition had exploded as it was being loaded onto barges for stowage on the aircraft carrier, HMS Triumph".

Ammunition explosion at Bedenham on Friday, July 14th 1950. Proved to be sabotage. Caused extensive damage to our house. Notice: Cranes (now blown in sea). Ammunition train on pier (Train and most of pier also in the sea). Ammunition barges and flying fragments.

Recollections from another witness - Roger Bryant:

"I wonder if any of you remember an incident on the evening of the 14 July 1950 when six lighters being loaded with ammunition at Bedenham Pier, Gosport, in the Royal Naval Armament Supply Depot blew up in a massive explosion, heard all over Portsmouth.  The explosion completely destroyed two lighters loaded with depth charges and 1,000 ton bombs.  Then 50 minutes later, a second explosion destroyed the remaining four lighters.  Astonishingly, no one was killed."

"In Portsmouth, the principal damage was to the plate glass windows of shops, particularly in Commercial Road and the Guildhall Square.  Many of us remember that during the war bomb blast did strange things.  Some windows were blown out; others next to them remained intact.  So it was on this July evening.  In a piano shop in Commercial Road, blast sucked out a large second floor window, while the windows on the first floor remained intact!  In the London Road area, not only shops but houses had windows blown out but again no one was killed."

"Police cars toured the city broadcasting the following: “An explosion has occurred at Gosport.  There is no cause for alarm.  You are, however, advised to keep open your windows to avoid damage in the event of further explosions”.  The following morning was reminiscent of the wartime air raids with streets and pavements strewn with broken glass." 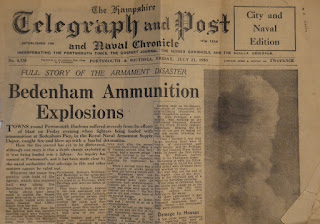 "The wheel of a locomotive was blown across the harbour and landed in Landport, again without injury to anyone.  Fortunately the damage was slight, other than in the Armament Depot which was massively damaged, and there were no casualties.  This was at the height of the Cold War and sabotage was immediately suspected.  There were many communists in this country, virtually all loyal to this country, but there were spies, like Philby, and no doubt saboteurs.  I may be wrong but, as far as I can remember, the cause of the explosion was never established."

For the full story of the Bedenham Ammunition Explosion, you can read Paul Woodman's excellent article in the Portchester Matters magazine (Page 6-7, Issue 15, Winter 2017) here.