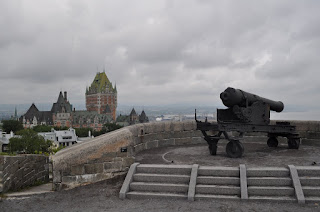 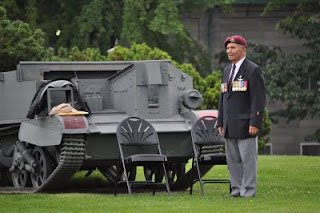 It is 250 years (almost to the day) since Wolfe led a 5,300 strong force into Quebec City and claimed Canada for the British Crown. The assault had been made via the Abraham Heights after a prolonged artillery barrage from across the St Lawrence river. Montcalm's French army along with a large French Canadian contingent had been routed within 30 minutes after receiving the full force of British volley fire. 250 years later - in 2009 - the planned re-enactment has been cancelled following pressure from local French Canadian activists but nevertheless my brother in law and I had a great day walking the Heights of Abraham battlefield. The battlefield is now a national heritage site containing a number of military artifacts.

The pictures above were taken in the citadel (a later construction). The top image shows 'Rachel' an 1870 British cannon pointing over the old city. Several generations ago my father's Great Grandfather (Arthur Taylor) served in Quebec (in the 1860s/70s). It may be a coincidence but his daughter was called Rachel too! The other picture shows a WWII veteran posing beside a bren gun carrier in the Quebec Citadel which is now the headquarters of the Canadian 22nd regiment.
Posted by Curmo at 12:57

Back in 2005 - "Christmas on the Rhine?" says my wife, Mo. "Good idea" I replied. Actually the idea was not a great one but there was one big compensating factor. A one day stop at the town of Remagen.

So off I went to find the remains of the Ludendorff Railway Bridge - an icon of WWII military history.


Just after 4pm on the 7th March 1945, American GIs of Company A, U.S. 27th Armoured Battalion took this key Rhine crossing under fire. The demolition charges set by the defenders failed to go off and so it was that Sergeant Jo DeLizio and Lieutenant Karl Timmerman led their men over to the East Bank of the river.

The bridge towers on the West Bank have been preserved as a monument and the immediate vicinity has been left untouched. Sadly the towers on the East Bank, and the railway tunnel beyond, were not readily accessible since the bridge was never rebuilt and, being winter, there was no boat available for a crossing.

In the town itself there is a small military cemetery containing German casualties from both world wars. outside of town one can walk through the river side meadows which were once the site of vast POW pens. There are still signs of this sad period in the form of barbed wire strands littering the ground.

And the cruise? - actually the whole 'cruising' experience was so bad it was funny. We had a great time.
Posted by Curmo at 16:23 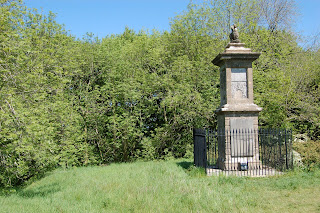 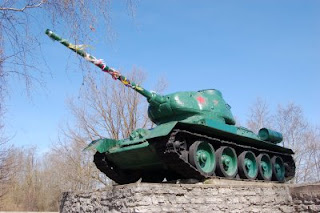 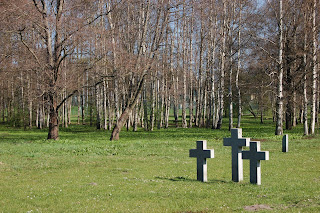 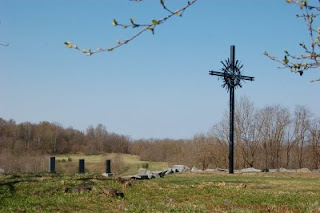 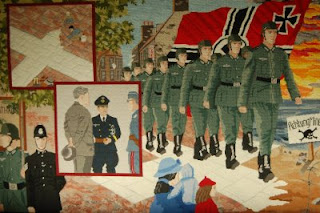 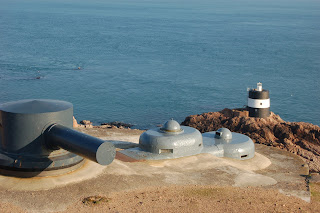 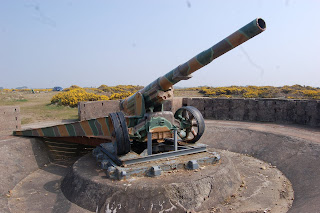 Have just returned from a walking holiday in Jersey. Early April is a lovely time of year to visit the island. Few tourists, spring flowers and cheap prices. My wife and I walked most of the cliff tops on the North coast. As usual I had a secret agenda.......Festung Jersey! The Channel Islands were occupied by the Germans through WW2 and Hitler ordered Jersey, Guernsey, Stark and Alderney to be fortified. 20% of Todt's Atlantic Wall budget was originally earmarked for the islands. The evidence is everywhere. The pictures above show: (1) A panel from the Occupation Tapestry at St Helier (2) A range finder at the Lothringen Battery, Noirmont Point and (3) One of the four gun emplacements at the Moltke Battery, Les Landes. [The Moltke gun 1s a 15.5cm French piece. After the war tons of material was thrown off the cliff at Rouge Nez by the Royal Engineers. Recently, a group of local enthusiasts have recovered and restored a number of artifacts].
Posted by Curmo at 18:09

Crete, whilst in Allied hands was a valuable air base for raids on Axis targets in Southern Europe, or to support the Balkan Front. The Allied forces consisted of 30,000 British troops, 11,000 Greek troops encumbered by 15,000 Italian prisoners of war.  Hardware was scarce with only 16 light tanks and 49 field guns. The core of the force was made up of the 6th Australian Division and the 2nd NZ Division.

Crete in Axis hands meant that the Allied bases in the eastern Mediterranean, and the use of the Suez Canal, could be exposed to greater pressure from the Luftwaffe. The attack by Fliegerkorps X1 and V111 would be the biggest German paratrooper assault of the war. The two corps had at their disposal about 500 transport aircrafts, 150-dive bombers, 180 fighters and 40 reconnaissance planes. There were 22,750 men - 75 by glider, 10.000 by parachute, 5,000 by transport aircraft and 7,000 by sea. The first attack was Maleme with a second at Rethimo and Heraklion respectively.

The key to the success of the German "Operation Mercury" was the strategically important airfield at Maleme "Point 107" which overlooked it.

On May 21st, the day after the initial assault the airfield fell and a British counter attack was repulsed by the defending German paratroopers. Maleme Airfield is now used by the Greek Airforce but it is possible to get a panoramic view from the German cemetery which is located on top of a hill known asPoint 107. The cemetery contains 4,466 fallen German servicemen.

On May 24th, General Ringel organised his forces for the main German attack. Withdrawal of the Allied 5th Brigade allowed the completion of a defensive line from Staliana to Khania. After an unsuccesful attack on the 25th May, the Germans eventually entered Perivolia and Galaria. General Freyburg ordered the final withdrawal to Sfakia. The Germans learnt of the proposed Allied evacuation and entered Chania on May 27th, gaining control of Suada Bay where there is now a stunningly situated CWGC cemetery.
The British / Commonweath troops fought a last rearguard action north of the White Mountains during the final week of May and on the 28th the British evacuated Heraklion. Overnight on May 29th/30th the Allied rearguard maintained the Stafkia beach-head. The Rethimo garrison was obliged to surrender to the Germans and the last evacuations were made on the 31st May.

Battlefield walking in the sun can be hard work. For a more comfortable look at a WWII relic it is possible to hire a boat from Chania and snorkel over the decaying remnants of a ME110 which is 'belly up' on the sea floor a few hundred metres from land.

This particular trip had a particular poignancy as the day we arrived, '9/11' unfolded. We were in a public bus and people started receiving texts. The first as I recall was that the "Pentagon has been bombed".  The bus driver was listening to the commentary on a local football game. He wouldn't be persuaded to switch channels and so it wasn't until we got to a bar with TV that the awful scale of this disaster became apparent.
Posted by Curmo at 13:12 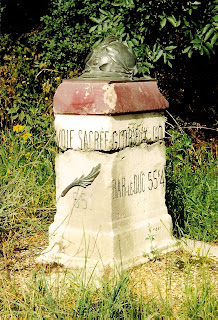 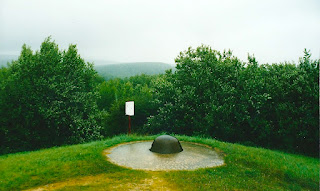 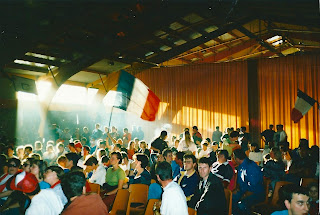 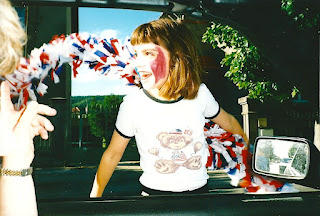