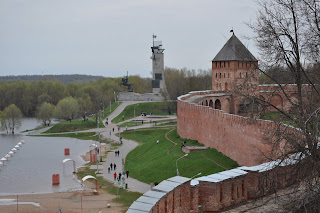 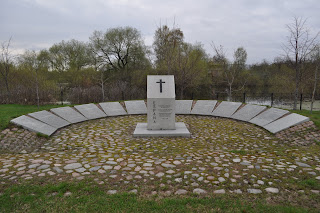 
South of the city is the superb Yuriev monastery. A German strongpoint in the war, the grounds are covered in vestiges of old bunkers and defensive positions. Across the water, but still on the West bank one can visit the remains of the original Lower Volkhov bridge, destroyed in 1941. The picture below shows a view looking South towards Lake Ilmen. 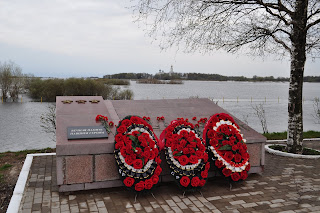 North of the city, much of the fighting in 42/43 was centred in the area of Myasnoy Bor. It was here that Vlasov's 2nd Shock Army broke through the German lines pushing forward to break the Leningrad Siege. Overall though the Lyuban Offensive failed as the German strongpoints along the river held fast in the face of the Russian onslaught. Vlasov's Army was surrounded and destroyed. Vlasov was taken prisoner by the Wehrmacht on July 6th 1942. The picture below shows a T34 just north of the point that formed the centre of the Lyuban jumping off point. 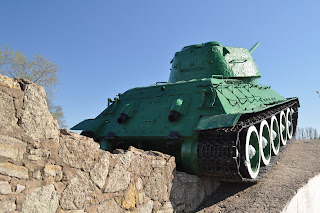 A few days before getting to Novgorod we had spent time in the bush around Demjansk (which will be the subject of a future blog entry). To the East of the town we had witnessed the excavation of fallen Russian (and German) soldiers. At Myasnoy Bor we felt honoured to be invited to the funeral and burial of other Russian heroes - this time from the area North of Volkhov where the Russian 52nd and 59th Armies were decimated. The picture below shows the ceremony at the impressive Myasnor Bor Memorial complex. 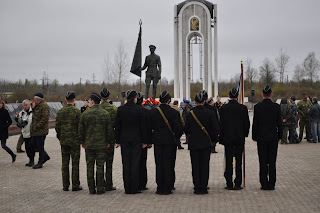 Travelling back to St Petersburg on the most direct route takes the traveller along the old German front line for about 100km. In 1942 because of shortages of personnel the 16th Army wasn't able to man an uninterrupted front line. Instead the Wehrmacht set up a series of interlocked strongpoints. We visited the sites of a few. In particular Spassky Politka which successfully held out for a couple of weeks during the Lyuban Offensive. The remnants of gun pits, bunkers and trenches were there - though inaccessible due to water logged ground.