On Saturday 26th August 2017 a commemorative paving stone in honour of Corporal Sidney Day VC was unveiled adjacent to the Norwich City War Memorial. Almost exactly 100 years prior to this date, on the 24th August 1917, Sidney Day earnt his Victoria Cross through outstanding heroism at Malakhoff Farm, Hargicourt.

Way back in 2004 I was contacted by a gentleman called Ron Mace who had been Sidney's neighbour in the post war years. Ron, who sadly died on 8th December 2013, felt very strongly that his ex neighbour's heroism should be acknowledged in his home town of Norwich. since Ron's death I've received regular updates from a friend of his, John Taylor, who has continued to constructively agitate for some kind of memorial. 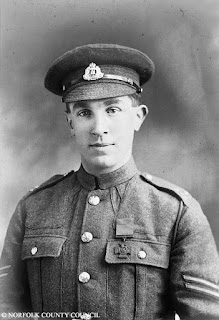 Sidney Day was was born on 3rd July 1891 at St Anne's Lane, St Julien, Norwich - a property that was demolished in the 1930s. Ron recalled that Day came from 'humble origins'. He had seven siblings, three of whom did not survive childhood. Ron described Sidney as 'a very unassuming gentlemen' in his first letter to me. During the war Sidney was far from 'unassuming'. His stand-out courage reached it's zenith at Malakhoff Farm and his citation reads as follows.

Cpl Day successfully commanded a bombing section detailed to clear enemy trenches, killing two and taking four prisoners. Where the trench was levelled, he went on alone to contact flanking troops. On his return, a stick-bomb fell into the trench where there were five wounded. He seized the bomb and threw it out, where it exploded harmlessly, saving the lives of the wounded. He completed the clearing of the trench and remained in an advanced position for sixty-four hours under constant fire. His conduct throughout was an inspiration to all.

The commemoration at Norwich recognised two local heroes - Sidney Day VC of the Cambs Suffolks and Wilfred Edwards VC of the 7th Battalion, The King's Own Yorkshire Light Infantry. Day's commemorative stone was unveiled by Michael Day, Sidney's son, and Deputy Lieutenant General the Lord Dannatt. After the ceremony I was delighted to have the opportunity of meeting Michael and two of his children (Sidney's grandchildren) - Chris and Michelle, along with six from the very latest generation of the Day family.

Notwithstanding this token of remembrance, John Taylor is still pressing for a commemorative marker in the St Anne's area of Norwich where Sidney Day was born and where he lived prior to joining up. The area is currently undergoing major development and I'm delighted to say that Orbit Homes are very sympathetic to this idea. I hope to share some good news in this regard towards the end of this year.

Sidney Day's testimonial read by his son Michael can be viewed here.