During what history may record as the Great Pandemic of 2020 to 2021, restrictions on travel have meant that my battlefield walking has been confined to the local area. Whilst this has been frustrating to say the least, it has given me the opportunity to make new discoveries close to home. The nearby village of Kingston Seymour is tucked away on flatlands near the mouth of the River Yeo and, like virtually every other town and village in the country, there is military history to be discovered - always in the local church, and often elsewhere.

I started my walk at the very fine Kingston Seymour war memorial. A 14th or 15th Century stone cross has been repurposed as a memorial to those who died in the Great War of 1914-19. After admiring the four carved figures representing Victory, Peace, St George and St Michael and visiting the local church I headed off to see if I could catch a glimpse of the Bristol Channel from the fields beyond the village. Sadly, access to the foreshore is impossible but as I was strolling back I noticed what looked like a military bunker half way up Yeo Bank Lane.
Later, in the evening, I discovered a pamphlet entitled 'Battle's Over, Long Historical Trail' produced by the Kingston Seymour History Group. The bunker I'd chanced upon was in fact built by a local farmer, Don Griffin, in 1941. He wanted to protect his family given that the village had been designated a combined QL and QF decoy site - the latter sometimes referenced as SF or Starfish.
I was aware of the so-called Starfish sites around Bristol. Indeed the first one to be built in the United Kingdom is situated on nearby Black Down. Of the 18 QL and QF sites built to protect Bristol and Avonmouth, four are in the vicinity of Clevedon - Kingston Seymour, Priddy, Downside and Kenn Moor. 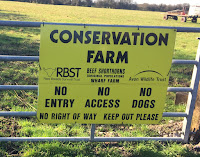