Leningrad - The Corridor of Hope

Today the road from St Petersburg to Ladoozskoe Ozero is an easy one (apart from the need to negotiate your way through the contractors vehicles parked up on the site of the yetto be completed ring road).  Taking the A103 one passes the Finland Station before heading off down a route which was, in essence, a lifeline during the siege years. The road is delineated by markers (see marker number 41 below) and memorials. At the end one reaches a simple memorial gateway on the shore of Lake Lagoda by the side of which there is an anti aicraft gun still pointing at the sky above the old 'ice road' (right below).

Despite the early onset of warm weather, ice was still present on the margins of the lake when we visited at the end of May (picture left). The picture in the middle shows the start of one of the main routes for the 'ice road'. Pictured left to right - Vladimir, Mark , Julia and myself.
The story of the Ice Road is remarkable and I don't intend to recount it here. However at the St Petersburg Artillery Museum I did find an excellent picture of Russian KV1 tanks crossing the lake (see below). A veteran told me that when the ice thinned the turrets would be taken off to lessen the weight. The drivers must have had some guts!

The first train through to Leningrad after the siege was broken is on view near M'ore on the lake shore. I grabbed a picture just as a modern train sped through. The picture on the left is an idealised image of the first journey.

Of course the whole outcome of the battle would have been different had the XXXIX Panzer Korp swung north and crossed the Neva river after 20. Infantrie Division took the lake side town of Schlusselburg on the 6th September 1941. I had been very keen to visit this pivotal location and in particular to see the island fortress called Oreshek (the Nut). Following a heroic action by just 12 Russian sailors the fortress, the garrison of which was subsequently reinforced, held out from September 1941 through to the breaking of the Leningrad encirclement in January 1943. After negotiating a passage across 500 metres of freezing water I was able to take some remarkable photographs of the place.  As can be seen, it wasn't easy to get in but my thanks go to Julia who helped Mark, Julia (our guide) and myself to climb in. 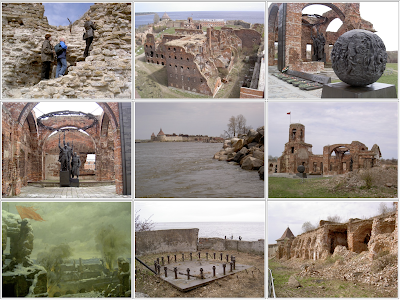 The red flag flew from the smashed tower at Oreshek throughout the siege and flies on the ruins still. A remarkable place and one of the most resonant WWII sites I have ever visited.
Posted by Curmo at 12:34