On the night of the 14th and 15th November 1940, my cousin once removed, Tom Neal, was killed in action whilst at the controls of a Whitley Mk V bomber over Berlin. Tom was serving with the Royal Navy so how could this be? The answer is that having taken a short service commission in the Fleet Air Arm a year earlier, Tom had volunteered to serve with Bomber Command at the height of the Battle of Britain. During this critical time, Bomber Command had lost over a thousand aircrew - approximately 800 killed and 200 taken prisoner. Short of qualified personnel, the RAF had sought temporary replacements from the Fleet Air Arm. Sub Lieutenant Thomas Alfred Neal was one of sixty pilots who had offered their services. He had already flown a number of missions before the one in which he was killed - hence his position as pilot and status as the senior officer aboard.

Tom was just 21 years old when he was killed, and the impact on his family was profound. He left a younger brother, Jim Neal, who wrote about Tom in his unpublished autobiography 'Foot slogging, Pen Pushing and Publishing'. Jimmy was a journalist by trade and by the end of his career was the editor of the Yorkshire Post. During the war years Jimmy served in North Africa and Italy - a story for another day.

The Neal boys were born in Alton Hampshire. Their father, Thomas, was an Assistant Manager at the local branch of lloyds Bank. His wife (my Great Grandmother) is described by Jimmy as being a 'wonderful, almost saintly woman'. Jimmy recalls Tom 'discovering everything' before he did and had an early memory of making bows and arrows. He remembers Tom buying an elderly Austin Seven having saved his wages from a job at the GPO. In his spare time, Tom was studying for a degree in engineering. He also remembers Tom playing a rather elaborate joke on a posh neighbour using an imitation dog turd!
Tom learnt to fly with a friend called Charles Tate, whose father was the Tate of Tate and Lyle, the sugar manufacturers. Jimmy remembers that 'the two of them had just taken off from an aerodrome near Oxford when the plane crashed at Wallingford - neither were seriously hurt but there were plenty of cuts and bruises'. Tom shared his three golden rules: 'If the engine stalls don't turn, if the engine stalls don't turn and if the engine stalls don't turn!'. Not long after that Tom accepted a short service commission in the Fleet Air Arm. He completed his training at the Royal Naval College at Greenwich, and became a Fleet Air Arm sub-lieutenant. As was mentioned earlier, Tom volunteered for Bomber Command and was posted to 77 Squadron at Topcliffe, nr Thirsk in Yorkshire - flying Whitley Mk Vs. 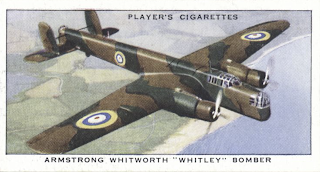 Martin Middlebrook and Chris Everitt's 'The Bomber Command War Diaries: An Operational Reference Book 1939-45' records that on the night of 14/15th November 1940, 82 Wellingtons Hampdens and Whitleys raided Berlin, hamburg and various airfields. 50 targeted Berlin but only 25 reached the city. 10 aircraft were lost - 4 Hampdens, 4 Whitleys (including Tom's aircraft) and 2 Wellingtons. It was the heaviest loss of the war so far.

Jimmy recalled the moment he heard of his brothers loss in his autobiography:

Father had left our Haslemere home furnished and had moved to a private hotel in Petersfield, Hants. I joined him there on a seven-day leave pass and was expecting Tom to be with us when we received a telegram to the effect that he had failed to return from a bombing mission over Berlin and had been posted as missing. I was glad that I was with my father at this sad time and we both lived through anxious days hoping against hope that better news would arrive. Sadly, it didn't and many months passed before Tom's death was confirmed and the Admiralty sent my father a picture of his son's grave in East Berlin.'

Jimmy went on to write the following, before moving to active service with the British 8th Army shortly thereafter:

Tom had been, not only my brother, but my best friend. The loss was devastating, and I could only resolve, if I got the chance, to fight the enemy even more strenuously than i might otherwise had done. The war was becoming a rather more personal battle.

Tom and his crew are buried in the main Commonwealth War Graves Cemetery in Berlin (quite near the 1936 Olympic Stadium). His all RAF crew lie with him - Pilot Officer G.D. Bailey, Sergeant J.C. Steel (19 years old), Sergeant R.W.Toomey and Sergeant V.H.Louis (air Gunner). Tom's grave acknowledges that he was a Royal Navy pilot seconded from HMS Daedalus.