In November 2021 I was invited by the Royal British Legion to attend a ceremony of remembrance at the Commonwealth War Graves plot in Milton Cemetery, Weston-super-Mare. The particular focus of this event, were twenty three men who had been killed when their Horsa glider broke apart in mid-air over the village of Paulton near Bristol. On Sunday, 17 September 1944 at 10:25, a Short Stirling of 299 Squadron had taken off from RAF Keevil in Wiltshire, towing Horsa Glider RJ113. The entire complement of the glider was lost when the glider disintegrated - twenty one men of 1 Platoon, 9th (Airborne) Field Company, Royal Engineers and two crew from the Glider Pilot Regiment. 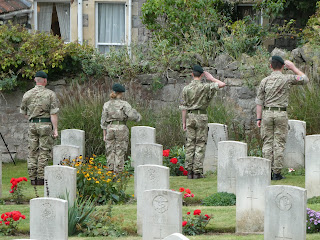 Wreaths were laid on behalf of The Volunteer Training Development Team at Regional Command, The Bristol Royal Engineers Association, The Glider Pilot Regiment Society, The Royal British Legion and The Double Hills Arnhem Commemoration Committee. Fittingly, a final wreath was laid on behalf of Mrs Valerie Austin, daughter of Sapper John Fernyhough - one of the casualties. After the Collect of The Army Air Corps and the Collect of The Royal Engineers, the padre asked those present to remember with thanksgiving all those who have died on operational service, especially the 23 soldiers who died aboard glider RJ113, the first casualties of Operation Market Garden. The customary two minutes silence was observed and flags were paraded. 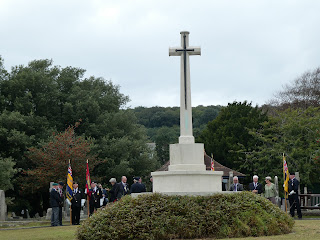 Whilst researching his book 'Arnhem 1944: The Airborne Battle', Martin Middlebrook tracked down the tail gunner of the 299 Squadron Stirling that was towing the glider in question. Sergeant Wally Simpson's eye-witness account does not make comfortable reading.
I was watching the Horsa trailing behind when suddenly, the glider just seemed to part in the middle; it looked as if the tail portion parted from the front. Horrified, I shouted to the skipper, "my God, the glider is coming apart". As the tail section of the glider fell earthwards, its front section was still in tow with the Stirling and falling like a rock to earth. As it fell, the tow rope gave way and fell with the glider still attached to it. Had the tow rope not broken when it did, I shudder to think what might have been.
The pictures below show a Horsa under tow by an Armstrong Whitworth Albemarle during the earlier D-Day campaign. Photo credits: Jonathan Ware. 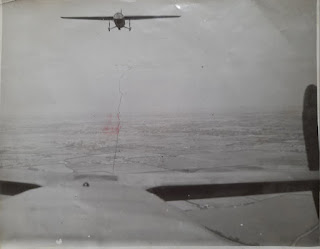 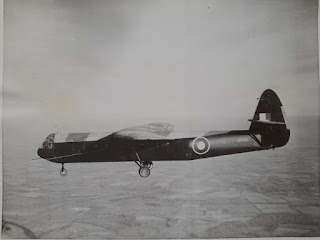 After the incident the Stirling tow aircraft returned to RAF Keeble. The crash site had been marked and the crew of the bomber resolved to travel back to Somerset by jeep and find their lost comrades. Simpson remembered what he and his skipper found.
We left the formation and gradually lost height and turned back to locate the wreckage. Noting the spot, we reurned to Keevil and then drove by jeep to the crash location. I described it at the time as being like a matchbox that had been stepped on. The bodies of the men had remained inside. I had no way of estimating how many dead there were. There were no survivors.

Apparently the other half of the RE platoon was flying a glider just below and watched, with understandable horror, the wreckage floating downwards. The tail fell in a roadway and the fuselage section fell in a field on a feature known locally as Double Hills. The cause of the accident was never established. 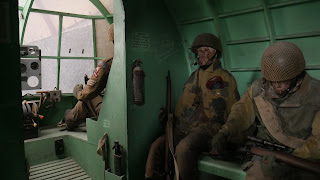 One can get a sense of what the interior of a Horsa was like by visiting the example in the Cobbaton Military Vehicle Collection in Devon. The replica shown in the image above was built for the film A Bridge to Far.

A couple of months after the ceremony in Weston-super-Mare I took a trip out to the crash site which is a short walk out of the village of Paulton in the Mendip Hills. The spot is marked by a rather impressive memorial which lists the names of those who were killed. A plaque informs the visitor that the memorial was unveiled - very appropriately - by the commander of the British 1st Airborne Division at Arnhem, Major General R.E. Urquhart CB. DSO. on the 23rd September 1979.

The memorial is clearly looked after. Indeed some of the names of those who have been involved in its upkeep are recorded on the site. The memorial was flanked by two striking sculptures but both are gone (presumed stolen) - as shown in the second undated photo. A plaque records the one on the right has having been a sapper of the 9th Field Company (Airborne) Royal Engineers. Created and donated by SPR Roy Cleeves 2008.