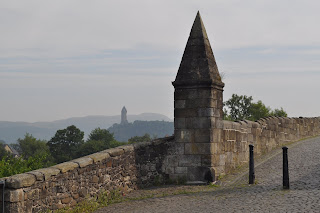 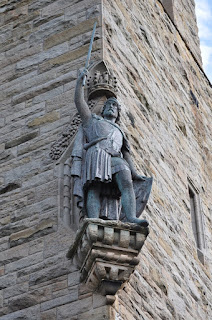 The picture above shows what is purported to be one of the earliest stones commemorating Sir William Wallace's attempts to regain Scotland's nationhood. The memorial is located in the aptly named town of Wallacestone where local legend has it that Wallace fought the first Battle of Falkirk. Like Stirling Bridge ten months previously, Wallace was outnumbered but had a highly motivated army. To quote the film 'Braveheart' "they can take our country but they can't take our freedom". Unfortunately since Stirling Bridge a number of Scottish nobles had withdrawn their support for Wallace. Without cavalry his small army was outclassed by an English Army equipped with a thirst for revenge and over a thousand archers. Wallace's army was destroyed and the man himself barely escaped with his life. (He was later betrayed and tortured/executed in London).

Enter Robert the Bruce, a man who had switched his allegiance from the English and now fought to win the crown of Scotland. At Bannockburn in 1314, Bruce defeated a 20,000 strong army led by Edward II with a Highland force of just 6,000 heads. The picture above shows the modern day monument which stands on the Borestone where Robert the Bruce raised his standard. The area in the background is the New Park (left) and Coxett Hill (right). Here the Scots had barred the route to Stirling Castle which the English were looking to reinforce. To the right of the monument is an area previously known as the Carse (boggy ground). This was where the English originally made camp.

In a similiar fashion to the tactics used by Wallace at Stirling Bridge, part of the English Army were trapped on the northern side of a couple of tidal streams (the Bannock and Pelstream Burns). The fighting lasted two days and ended in a decisive Scottish victory. Once again English underestimation of their opponents and poor choice of ground left archers isolated, cavalry ineffective in marsh land and the bulk of the army fighting in a confined space with their backs to the impassable watercourses over which they had struggled during the previous day - after a long and arduous march.

William Wallace at Dunottar Castle
Posted by Curmo at 17:53