The Crimea is a tempting destination for anyone interested in military history. The 1854/55 Crimean War battlefields are overlayed with the detrius of WWII. In addition there are the cold war submarine pens at Balaklava and the breathtaking sight of the Black Sea Fleet (Russian & Ukrainian at Sevastopol). This page gives a taste of the WWII sites which centre around the great siege of 1942 (from which Sevastopol was give Soviet Hero City status) and the liberation in 1944. 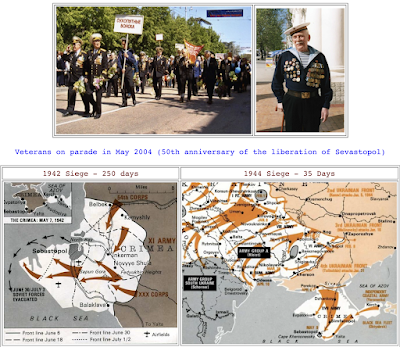 Once the Germans had cracked the Crimean Front they moved their heavy artillry for an all out attack on the Black sea port of Sevastopol. After a siege culminating in 24 days of vicious street fighting the Russian Army was forced to abandon the city. They left an exhaused German army.

The picture below left shows one of the massive railway guns used to defend the city during the siege. The guns were wheeled in and out of tunnels and were called 'grey ghosts' by the Germans because they appeared and then disappeared.

The picture in the middle shows a huge memorial overlooking the entrance to Sevastopol harbour. Designed by Andropov's daughter it is disliked by the locals mainly because its proportions are all wrong. The white mark in the bottom left is a van - this gives an indication of the vast size of this monument.

The picture on the right shows a Russian Memorial near El Buron mountain. We were unsuccessful in finding Manstein's headquarters though we knew, from locals, that remnants still exist.

The 1994 siege culminated in the liberation of Sevastopol on May 9th 1944. A particularly significant battle took place on the Sapun Ridge (overlooking the 1854 Balaklava battlefield). The trench system is still very evident and there are a myriad of tunnels and bunkers. Elsewhere around the city one can find bunkers, shell marked buildings and the usual battlefield debris.

We were lucky enough to see a re-enactment of the assault on the Sapun Ridge. The pictures below were taken at this extremely well attended event. Like everywhere else in the old Soviet Union countries, veterans are venerated and many old soldiers were present for these celebratory events.

The 'Deutsche Soldatenfriedhofe' on the Sevastopol - Gontscharnoje Road is relatively new. 11,000 fallen axis soldiers are buried there with 3,870 interred in the last 12 months. 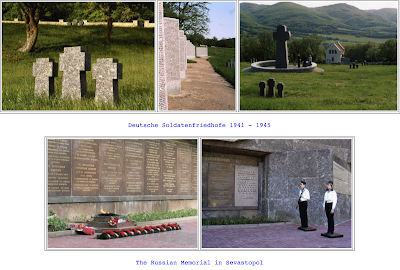