We started our exploration of this battlefield by looking at the defense of the Northern Shoulder - an area known as 'Little Switzerland'. I used the personal diary of Major Glenn W. Zarger, 2nd Battalion, 12th Infantry Regiment, 4th Infantry Division as our guide. This unit had just returned from the Hurtgen Forest for rehabilitation. Understrength with each platoon responsible for a mile of wooded, rugged terrain, the Battalion was attacked on the 16th December 1944 by the German 212st Volks Grenadier Division. The unit fought a successful defensive action around villages like Consdorf and Echternach. Many other units fared less well.

Up on the Schnee Eifel it is easy to see the remains of fox holes and trenches amongst the shattered remains of the much vaunted West Wall.

The evidence of Wacht Am Rhein (known to the Allies as the Battle of the bulge) can be seen everywhere. Of the three Panther's still on the battlefoeld, the example at Houffalize is the most impressive. The Sherman sitting in the castle grounds at the picturesque town of Clervaix was disabled very close to the spot where it is now preserved. The furthest point reached by German tanks was Celles and the panther shown below (extreme right) is close to the spot where the spearhead of the 2nd Panzer Division was shattered by Allied air attacks by P-51s on Christmas Eve 1944.

The furthest point reached by German reconnaissance units was the Rocher Bayard when three men from Skorzeny's 150th Panzer Brigade, driving a captured American jeep were stopped dead by men of the British 29th Armoured Brigade.

The action fought by the 101st Airbourne and other units in Bastogne was, of course, critical to the eventual outcome. The perimeter around Bastogne is marked out by tank turrets. The little village Foy with it's quiet German cemetery and American Memorial forces an appreciation of the human cost of this battle. The huge American Memorial in Bastogne gives a terrific view of the whole Bastogne area (if you have the stamina to climb the steps!).

For a German perspective we  followed the route taken by Kampgruppe Peiper (a component of Mohnke's 1st SS Liebstandarte Panzer Division). This group consisted of 117 tanks, 149 half tracks, 18 105mm guns, 6 150mm guns, 40 anti aircraft systems and 4,800 men. Starting at Losheim on the frontier we followed the winding roads through towns like Bullingen, Malmedy and Stavelot (hearing some very sad stories on the way). The half track shown stands next to the bridge at Stavelot which Peiper passed over on the 18th December 1944. The following evening the bridge was blown by American engineers after the Kampgruppe had passed through.

The journey continued through places like Trois Point but eventually ended at Cheneux and Stoumont where Peiper's men had fought themselves to a standstill incumbered by a lack of fuel. The marker stone shown below is at the furthest point of Peiper's advance. A spot where three Panthers were destroyed by an American Tank Destroyer on the 22nd December 1944. 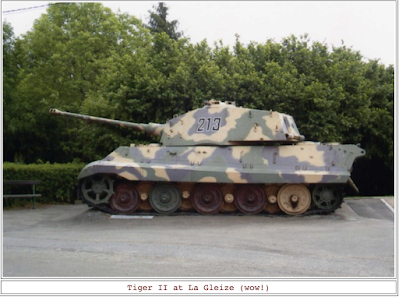 On the 23rd December 1944 Peiper and 800 of his men walked out of their last billets at La Gleize, returning to their Divisional Command Post in Wanne just South of Stavelot. They left 300 wounded comrades and a large number of American prisoners. They also left there vehicles including SS Obersturmfuhrer Dollinger's Tiger 213 of the Heavy SS Panzer Battalion. This impressive relic is shown above in it's current location - La Gleize. 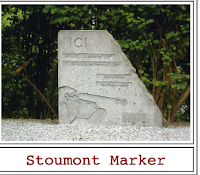 A note from my father (a retired meteorologist): It has long been considered that the meteorological support for the German attack was a triumph. The met people were asked by the High Command if they could predict a 4four day window when the fog and low cloud would prevent the allied air forces from activity. Most weather patterns come from the West and the Germans had nothing from that area at all and they made a very successful forecast (as Group Captain Stagg did for DDay). When the German retreat started all the staff papers and weather charts were bundled into a truck to be taken back to the national archives in Berlin. As the Berlin situation was worsening they were diverted to Munich - all were seemingly lost when the convoy was strafed by the RAF. Some weeks later two off duty airmen were wandering through the ruins of Munich and stopped at a fast food take away. As they were eating they were amazed to find that the paper used to wrap the food were some old weather maps. They immediately called the authorities and the pile of maps and other papers were safely saved for posterity. These were the very maps which were used to find the 4 day window! They can now be viewed in Berlin, with the original gravy stains.