This was a highly personal trip. My Great, Great Grandfather (Arthur Taylor) made the same journey in 1855 when he was serving in the ranks of the 17th Regiment of Foot. Taylor was present during the siege of Sevastopol from the 7th February 1855 through to the 29th July. I have his Crimea medals on my wall along with his service record which refers to Taylors' participation in the assault on the Great Redan on the 18th June 1855.

The picture above shows Arthur Taylor at a later point in his very impressive military career. He was promoted to ensign in the 100th foot on 21st October 1860 and purchased a Lieutenancy in the same regiment on the 25th June 1861. Transferred by exchange to the 25th Foot on the 12th November 1861 and became Instructor of Musketry on 1st February 1865. Appointed Captain in the 25th foot on the 1st April 1870 and transferred to the 23rd Foot (The Royal Welch Fusiliers) on 19th January 1876. He retired with the rank of Lt Colonel on 1st July 1881.

The old British supply base at Balaklava is a fascinating spot. You can now buy a fantastic villa overlooking the sea for 15,000 USD. There is also the added attraction of a cold war nuclear submarine base (and yes, you can get inside - well worth the effort). Sevastopol is filled with sites and artefacts of interest to a military historian.

Arthur Taylor has a number of connections with the Battle of the Alma (20th September 1854). Firstly his wife, Alma, was born in March 1855 and was named after the battle (maybe her father was there?). Secondly, Arthurs' daughter, Blanche, had Alma has her middle name. Thirdly, Arthur finished his career as a Lieutenant Colonel with the Royal Welch Fusiliers - a Regiment that distinguished itself on the Alma. 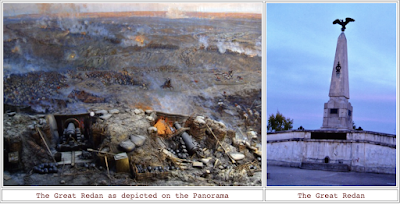 I walked up to the Great Redan following the line of attack taken by my Great, Great, Grandfather on the 18th June 1855. He never made it but I did - discovering the Memorial pictured above. The picture on the left was taken in the excellent Sevastopol Panorama Museum (A 'must see' for any visitor).

The picture on the left shows Mark (right), Manita (our guide) and me (left) standing on the site of the Charge of the Light Brigade. The Russian guns are behind us. The picture on the left is taken from Raglans' viewpoint on Mount Sapan. In the centre in the distance is Kamara and the four famous redoubts which run North - South along the line of the road.

We were just in time to stop the stone mason misspelling the word 'Battle' on the newly resited Inkerman Memorial. On the left we have a view of the Inkerman Battlefield from Menshikovs' viewpoint. Don't try and visit the site of the Sandbag Battery (where the pylons are) unless you want to spent a night in a Ukrainian Gaol. The Plateau is a Ukrainian Military Base. 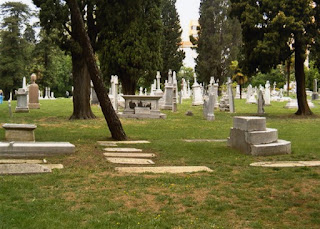 The Crimean War Cemetery in Istanbul is beautifully kept. It is adjacent to the Scutari Barracks where Florence Nightingales' rooms have been turned into an excellent museum.

I subsequently discovered that Arthur Taylor had been instrumental in setting up the new RWF Depot at Wrexham from 1877 to 1881. The following pictures are on display at the RWF Museum in Carnarfon Castle, North Wales. The caption reads - The Regimental Depot opened in 1877 when the town welcomed "our gallant fusiliers".

Arthurs' son, Bernard Arthur Taylor, served with the Royal Marines for 16 years.
Posted by Curmo at 07:45