Some historians argue that during what the Russian's call 'the Great Patriotic War', the Germans never really occupied parts of the Western Soviet Union - rather they held the main conurbations and maintained some control over the transport lines that were so vital to armies in the field.

Certainly the supply lines for Army Group North were under constant threat from the many partisan groups operating between Leningrad and Lake Ilmen.

The German 16th Army was the main lynchpin of the Southern flank of Army Group North. With a front line running South along the River Volkhov, around Lake Ilmen and then down to the Demjansk / Cholm area the logistical challenge of supply was a constant area of concern for the German command.

Travelling South from the fortified German headquarters area around Gatchina (to the West of Leningrad) the road to Kiev was the main route of supply for troops stationed in Staraya Russa and beyond. Recently I was sent some excellent photographs taken by an airmen of the 9th Luftwaffe Field Division which show various areas at the Northern end of the supply route.

The scene depicted on the image shown here is typical of the landscape found to the West of Leningrad. The photo was taken near Ceremykino, a small place due South of Oranienbaum (Lomonossow). The captions read "At the Rollbahn Leningrad - Narwa" (left) and "Blasting Operation" (right).

To the south West of Leningrad in the immediate vicinity of the Luga River valley, the vast Partisan's memorial is located in very similiar surroundings. The memorial which is about 80 km from St Petersburg on the road to Novgorod is truly monumental. It marks the valour of partisans from Leningrad, Pskov and Novgorod and was opened on Victory Day in 1975. 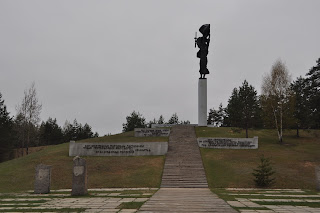 We were travelling down to Staraya Russa and had deliberately avoided the highway that runs directly North from Novgorod on the basis that travel through the rear echelon areas would be more interesting. Turning off the St Peterburg - Kiev highway we travelled down a pot holed minor road which in 1941 -  44 had been a major arterial route.

The partisan threat was brought to life for us when we arrived at the important rail and road crossing at New Osvina on the River Luga. Time had stood still over the last 60 years and we came across a German strongpoint just South of the ruins of 'Old' Osvino.

Walking this battlefield was a hugely gratifying experience. The river crossing was 'guarded' by mile after mile of gun pits, machine gun posts, trenches and deep bunkers. All untouched and ready to be interpreted. We walked the full length, stopping to appreciate the carefully positioned emplacements which gave a superb field of fire across the surrounding flat lands.

Crossing the new bridge and turning left we soon reached the vicinity of the old supply depot at Peredolskaya where, on the 27th January 1944 the 5th Brigade of the Russian Leningrad Front met up with the 59th Army from the Volkhov Front. A meeting which effectively rendered Leningrad safe from German intrusion. The spot is marked by an impressive memorial surrounded by tank traps retrieved from the river bank.
The several days loop circuit from Gatchina, South across the Luga to Saraya Russa, down to Demjansk and then back via the Novgorod and the Volkhov highway is one of the most fascinating battlefield tours I've undertaken. There's plenty of opportunity for walks as well!