The huge tragedy which occurred in the Balkans following the disintegration of Yugoslavia is difficult to comprehend. Having visited the area recently I find myself struggling to understand how ethnic cleansing, genocide and appalling brutality on such an unprecedented scale could have occurred in the heart of Europe in the late 20th century.

The wounds of the conflict are raw and many of the communities involved carry an enduring legacy which on an individual level manifests itself in a range of emotions ranging from unbridled animosity through to optimism about the future.

The story of the siege is in itself complex - it started with Croatian and local Bosniaks defending the town from Federal (or Serbian) forces. Later it became a territorial struggle between a largely Muslim Bosnian force and Croatian formations.

To understand more I hooked up with a local Muslim man called Jakic. Jakic had fought with the Bosnian Army before being airlifted to a German hospital having being shot by sniper whilst trying to lead civilians to safety. We spent a couple of hours walking the areas where the fighting had been most intense - in particular the main front line between the Bosnian Army (ARBiH) and the Croatian Defence Council's forces (HVO).

I had thought that the front line was delineated by the Neretva but actually it ran on the Western side following the line of the main street. Once the main bridges had been blown to stop the advance of Serb tanks the old bridge was the only means of crossing the river which runs through a deep gorge which effectively splits the town in two. The lines were just a few metres apart and the bullet ridden buildings are silent testimony to the ferocity of the fighting.

Some areas around Mostar are still covered in deadly landmines and there are a few locations in the City itself which remain dangerous. Nevertheless we did venture into some buildings which were known to be clear. In many instances firing positions and bunkers have been left as they were. The example below is on the East side facing towards the Croatian frontline which was just a few yards away. These lines were static for nine months through 1993.

It's a sad fact that post war the city is very much divided. Following ethnic cleansing the Muslim population has settled exclusively in the East and the Christians in the West. The towering minarets and church towers (competing for height) are symbolic of the role religion continues to play in this troubled part of the world.

However, not withstanding the divisions that split the population there are reasons to be positive about the future. The most striking example of this is the rebuilt 'old bridge' - a bridge that has a significance that goes way beyond its' primary purpose. The original bridge was destroyed by Croat artillery fire on the 10th November 1993. The restored bridge was opened on the 23rd July 2004. 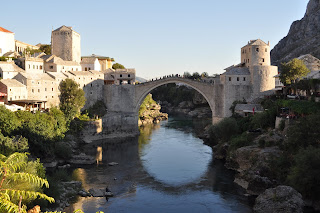 In some bombed buildings people are beginning to find a way of creating homes. This in addition to the outside funding which is making a big difference in rehousing homeless families.

Jakic took me to what he described as 'Ground Zero'. This is Spanish Square - a site where 22 Spanish servicemen are commemorated on a newly built memorial. I am told that the last UN soldier to die in Mostar was a Spanish Lieutenant killed by a sniper close to the area where the memorial now stands.

The biggest cause for hope though is the next generation. Sure, there are significant tensions amongst the local teenagers but there is a strong sense that many young people want to build consensus and make a separation from the troubles of the past. The final picture (above) shows students from around the world celebrating the diversity of the family of nations. There are signs that Mostar is healing - tourism will help but it is the next generation which will be decisive.