Today the only aircraft sounds I hear above my house are holiday flights banking over the Severn Estuary before heading South towards the sun. However, during the Second World War the sky held a very real danger as German bombers followed the same route travelling in the opposite direction. Between 1st Sept 1940 and 18th May 1943 the town suffered 16 raids - all 'overspill' from attacks on Bristol, Bath and Cardiff.


My battlefield walk today was very close to home. I set off on foot on a cold windy morning to investigate some of the WWII connections which can be found in the town of Clevedon, Somerset. The pill box pictured above is on Wain's Hill overlooking a popular local beauty spot called 'Poet's Walk'. Some 100 yards from the pill box, hidden in the bushes, is a derelict ammunition store. Ideally placed to monitor the raiders heading towards Bristol.

On the night of Jan 4th 1941, 103 aircraft from Luftfloffe 1 & 2 raided Avonmouth a few miles to the North of Clevedon. The weather was moderately good at the start of the raid but as it progressed cloud cover obscured the target areas. To overcome the lack of visibility the Heinkel IIIs bombed using guidance systems. As a result most of the 106.5 tonnes of H.E. bombs and 27,722 incendiary devices fell along the shores of the estuary.


Today, the Curzon Cinema is purported to be the oldest working movie theatre in the country. In the war years it was a popular spot for civilians and military personnel alike. At 21:38 on the 4th Jan 41, a bomb fell at the bottom of Old Church Road, opposite the cinema, killing an off duty soldier and wounding one other, plus two civilians. The casualty was a 22 year old Yorkshireman from Rotherham serving with the 4th Battalion, the East Yorkshire Regiment. 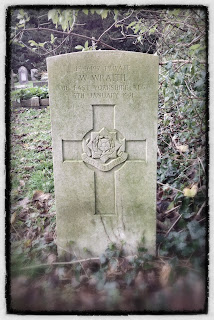 Private William Wraith (Regimental Number 4346197) passed away the next day in Clevedon Hospital and is buried in the Clevedon Town Cemetery.
Local resident Julie Angel remembers that the soldier who died had just spoken to her Dad, Roy Sellick, and his friend; "Good night lads". As they walked away the bomb fell. Her Dad always used to say "if we'd been older we would probably have stayed to talk with him and the outcome would have been very different".
It later transpired that nine high explosive bombs and six hundred incendiary devices fell in Clevedon that night. Weston-Super-Mare to the South suffered to an even greater extent. Five high explosive bombs and three thousand incendiaries fell on the town, killing 34 people and injuring a further 85.

Of the attacking force, 102 aircraft returned to their bases in Germany and the low countries unharmed. One aircraft crash landed on the return but there were no casualties.

As for the heavy explosive bombs that landed in Clevedon, in addition to the explosion outside of the cinema, two bombs straddled the Council House and several fell in Clapton Lane.
In an interview with local historian Mike Horsfield, Clevedon resident Mrs Kit Neale (nee May) remembers the first bomb falling on the Curzon and recalled that a second 50lb bomb fell on 'Haviland' in Queen's Road. She remembered it exploding in the soft earth and taking out a few windows.

During my walk this morning I thought I'd follow up on one local legend that I'd heard from an elderly neighbour. He had told me that on this fatal night an incendiary bomb had fallen through the roof of Copse Road Chapel. A knock on the door produced a helpful parishioner who showed me the damage to the roof.

The hole was patched up and a swastika was painted on the repair. A crucifix was subsequently painted over the top. A potent symbol of the triumph of good over evil. Apparently the Chapel would have burnt down had it not been for the presence of off duty soldiers who were billeted in the hall next door.
David Smale, who was in Miss Crisp's class at St John's school, remembers that after the raid the children were given a few days off.

(My thanks to Rob Campbell and John Penny for providing many of the facts quoted above).