Leningrad - The German Fortified Areas in the South

Ropsha is a small town to the South West of St Petersburg. During the siege it was an important hub for the German Army. One of the major siege batteries was stationed in the grounds of the chateau. To the South East was the fortified enclave of Gatchina where Von Leeb (the German commander of Army Group North) had his headquarters. East of Ropsha one can still admire the city of St Petersburg from the Pulkovo heights where the Germans caught their first view of the city in September 1941.

The gun pits in the chateau grounds are still viewable beyond the trees below the tank memorial. Prior to my visit I had been struck by picture of a small church at Ropsha. It carried the title 'A red army convoy drives past the ruins of a church at Ropsha. It had been used as a place of worship by the Wehrmacht during the siege'. With the help of our good friend Natalya Makeeva we found the church and uncovered a sad story. 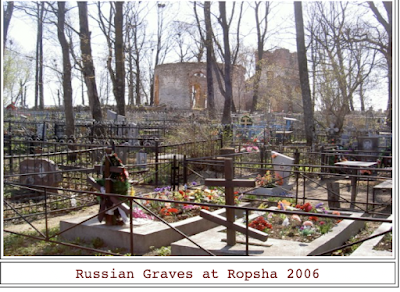 The top picture on the shows Ropsha Church as a Lutherian place of worship immediately following liberation. The picture underneath shows the wrecked church now surrounded by Russian war graves. I met a veteran in Lomonosov who showed me an article which sheds some light on what happened in this tragic place. The text is translated below.
'According to old Ropsha residents the Germans built their cemetery on the site of a Russian one - reinterring the bodies elsewhere. Amongst the German soldiers buried at Ropsha was a man called Christian Peterson, A Lutheran (his grave marker is circled in the article). The Russians broke up the grave and a soldier called Sergey Krestyanov was buried in the same plot. Much later Peterson's relatives from Australia visited the site and put an oil lamp on Sergey's grave in commemoration of the previous occupant of the plot. The Russian people have since left it there as a gesture of reconciliation'.
We had hoped to get to Krasny Bor where the Spanish Blue Division fought its last action in February 1943. Sadly, we encountered mechanical problems with our car but, nevertheless we did get to Kolpino where the 72nd Izhorsky Battalion had blunted and stopped the main German assault from the South in late 1941. The workers from the Izhorsky Tractor (latterly Tank) Plant had taken weapons and marched out to face the enemy whom they stopped dead a few miles south of the factory gates.

Taking the road from Kolpino to Gatchina is a good way of tracing the German siege line in the South. At one point the front line is marked by a series of white triangular markers. The area has many Russian cemeteries and memorials. 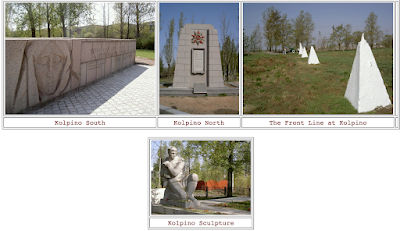 My thanks goes to Natalya Makeeva who introduced Mark and I to the ancient Russian custom of blagging a lift from any passing car. In Russia every car owner in the countryside is a potential taxi driver! Most were astonished that we wanted to go to the middle of knowhere to look at old trench lines, bunkers, etc. We made it back to the airport JUST in time!