Leningrad - Siniavino and the South East

Below the Siniavino heights there is a strip of marshy land which extends to the shores of Lake Lagoda. It was through this strip that the 123rd Rifle Division, 67th Army and the 372nd Rifle Division of 2nd Shock Army fought in order to link up thus breaking the siege on January 18th 1943. 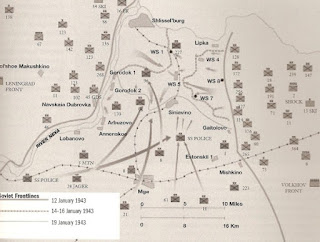 Julia, Mark & I were lucky enough to spend an evening with a veteran (Nikolay Vasipov) who was in this area in the action from the 20th January. Tears welled up in his eyes as he recounted travelling along the North/South road beneath the Siniavino Heights. "The trees were smashed and the air was thick with smoke from the burning peat. The Germans had constructed a road through the marshes. It was an inferno and I found it hard to ignore the cries of the wounded echoing through the smoke and the trees. It was hell on Earth". 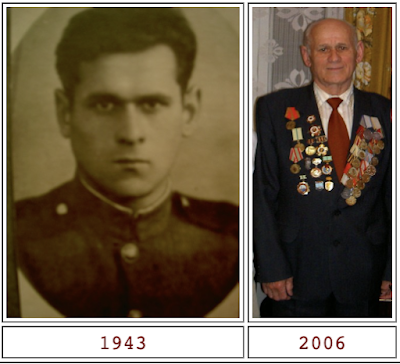 On the lip of the Siniavino Heights there is a large memorial and a number of graves including some very recent ones. We shared a drink with some Russian soldiers who were exhuming battlefield casualties and reburying them. The Russians refer to the people who are excavating the battlefield as white and black 'diggers'. We saw plenty of both kinds. The latter are best avoided. 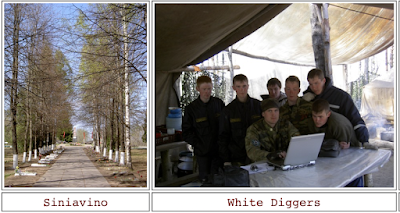 At the first moment of crisis when the Germans had almost surrounded Leningrad in September 1941, Zhukov briefly stepped on stage. He stiffened resolve and stabilised the front. With his usual elan he launched a counter attack across the River Neva. The resultant bridgehead was held throughout the siege. Today it is a bleak desolate place, covered in the detrius of war, fresh graves, and evidence of the work of 'black diggers'. One can walk around the bridgehead in an hour easily discerning the front lines and strong points. Amongst the memorials one can find a T34 tank and a symbolic representation of the destroyed hamlet of Nevski Dubrovska. A sad place. 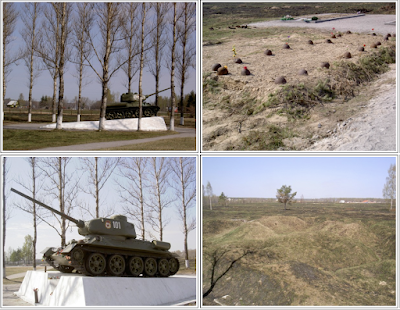 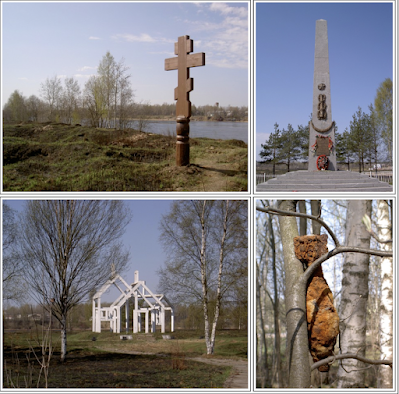 One of the reasons the Russians hung on so tenaciously at the Nevski Bridgehead is the proximity of the important railway junction at Mga. The day we visited Mga it was sunny but it was difficult not to be effected by the squalor of the place. A statue of Lenin dominates the decaying properties in the centre of town. The station, with its memorial plaque, was full of sleeping servicemen and drunks. A stark contrast to the stunning city of St Petersburg an hours drive away. 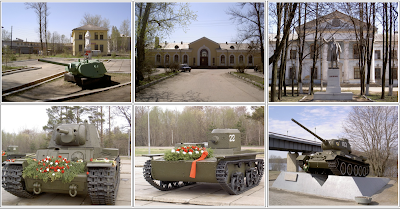 Top three pictures are Mga with the station in the centre. The bottom three are of tanks recently pulled out of the River Neva and restored by local enthuasiasts. The tanks can be viewed on the river bank near the settlement of Mar'ino.
Some way South of this area one can find the massive German Cemetery at Sologubovka. 80,000 burials in a picturesque location next to the recently restored church. Its isolation means some graves have been personalised. There are controversial memorials such as one dedicated to the men of Flanders who served with the SS (which had been broken and subsequently restored). 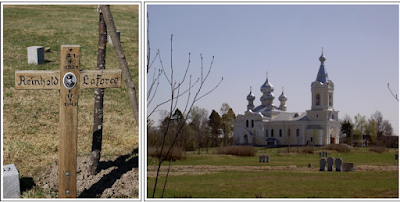 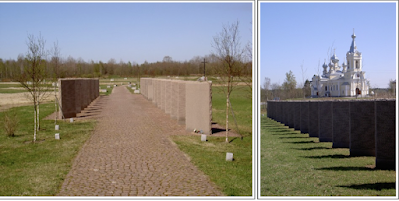 And finally - the stunning diorama at Mar'ino near Kivosk. This is located at the heart of the Memorial Complex housed in and near the ramp of the Lagoda Bridge. It commemorates Operation Iskra (spark) carried out between January 12th and 30th 1943. The 67th, 2nd and 8th armies broke the blockade linking up at the Workers Settlements numbers 1 and 5, Rabochy Posyoloks. The painting is by a number of local artists. Some of the panels are shown below. 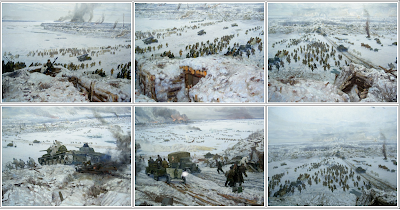 It was in this area that the fate of the city of Leningrad hung for several long years. My friend, the veteran - Nikolay Vasipov, told me that he never lost faith in victory. Here is a summary of his war service.
Born in Leningrad and left school at 14 years old. The opening day of Barbarossa (22nd June 1941) was a warm day - he remembers a band playing and everyone being happy. He remembers hearing news of the invasion on the radio and noticing a wind blowing.
Three days later he enlisted and after two weeks training was sent to help build an airfield at Schisselberg. He was there for three months and remembers people being shopt for being in possession of propoganda leaflets dropped from German planes.
There was no panic in Leningrad as the Germans approached - "the city will stay ours". Joined the 34th Ski Brigade, 67th Army. Remembers Zhukov arriving and making a difference "straight away". He says Zhukov cancelled an order to sink the fleet and exercised cruel authority.
Nikolay remembers the liberation of Schisselberg (the population would have preferred to stay under the Germans he says). He says that the remaining population of this town were taken to Leningrad and shot by the NKVD. Nikolay says the Germans 'lost heart' towards the end. He remembers a skinny Russian boy capturing two ruddy faced SS men.
After Leningrad Nikolay he joined Rifle Regiment number 51 and went to Lvov in the Ukraine by train. He remembers the decision to let the Breslau defenders out of the Kessel and ended the war clearing basements near the Berlin ring road. He ended the war facing the Japanese in Manchuria. Today this proud man lives with his delightful family in the suburbs of St Petersburg.
Posted by Curmo at 12:56