On 16th September 1941, 1st Panzer Division and 58 & 254 Infantry Divisions slashed through the Russian lines and reached the coast of the Gulf of Finland at Strelna thus cutting off the Russian 8th Army from other forces defending Leningrad. 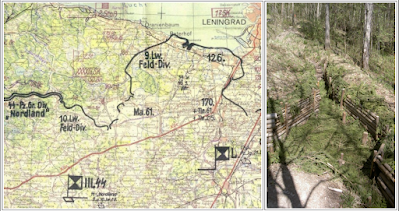 With the aid of our friend Natalya we enlisted the help of a couple of people from the private 8th Army museum in Oranienbaum and attempted to drive around the perimeter of the 'kessel'. We ran out of time partly because it was Victory Day and I never refuse the offer of cold meats and vodka from a veteran.  And there were quite a few veterans!

My friend Natalya took the pictures above. During the years of the heroic defence of Leningrad the defence line of Oraniembaum's bridgehead passed here. The inscription reads 'In September 1941 at this site of Oraniembaum's bridgehead the soldiers of the 191st and 48th infantry divisions (part of the 2nd guards division of workers), 2nd division of home guards, students of the navy school for marines, guards of machine-gun & artillery battalions held the line. They were supported by the artillery of the navy ships of the Baltic Fleet (the battleship "October Revolution", battle-cruisers "Kirov" and "Maxim Gor'ky" and other ships. From October of 1941 till May 1943 the soldiers of 48th division held this line, later until January 1944 the 168th infantry division fought here'. 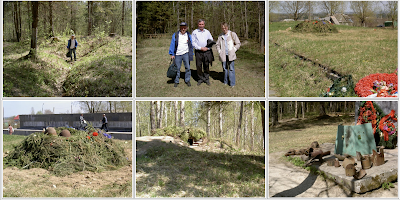 The pictures above were all taken on the East side of the pocket around Gostilicy where the T34s massed before the final breakout in January 1944.
The enclave which was 20 miles long and ten miles wide held out throughout the siege. Kronstadt provided a lifeline for supplies and a safe haven for supporting heavy artillery.

Pictures from left to right. First - veterans, a school delegation from East of the Urals and myself enjoying vodka and "authentic soldiers food" (the former was much more palatable than the latter). Second - a map showing the breakout and liberation of Peterhof and third - veterans enjoying a lunch in the field.

Pictures from left to right. First - gun positions on Kronstadt Island. Second - Peterhof Palace destroyed by the retreating Germans. Third - Peterhof spectacularly restored.
The attack by the 2nd Shock Army from the Oranienbaum enclave on January 14th 1944 supported by the guns of the Baltic Fleet was a key factor in the eventual lifting of the siege. Today Oranienbaum is called Lomonosov and this part of the battlefield is easily accessible by bus or car from Peterhof or by local train from Peterhof and St.Petersburg.
Posted by Curmo at 13:09