This page is devoted to a set of pictures taken within the city limits. Many were taken inside one or other of the excellent military museums.

The picture on the left (below) is of the Astoria Hotel. There is a rumour that the Germans had arranged to have their victory dinner here once the city had fallen. Some say that menus were printed. I found no evidence to suggest that either had any basis in fact. The middle picture shows the Cruiser Aurora decked out for Victory Day. During the siege the ship was moored at Oranienbaum, its mighty guns supporting the defenders of the enclave. It was sunk by the Germans but after the war was refloated. On the right the blue sign in Nevsky Prospekt warns shoppers to walk the other side so as to avoid incoming German fire (it has been left in situ to remind passers by of the black days of the siege).

Some of the following pictures show pieces of Nazi iconography. There are Russian propaganda caricatures of Hitler & Goebbels and uniform remnants from some of the Axis SS Divisions that fought in the area - Flemish, Scandinavian and the SS Police Division. The other photograph shows a Russian soldier removing a German directional sign. 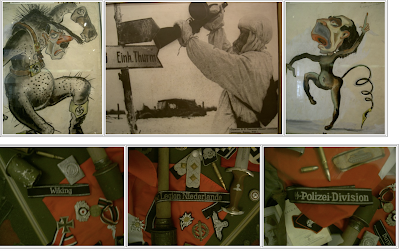 The following pictures show the main War Memorial situated on the main route in from the West quite close to the siege perimeter. The Memorial houses a museum and a quiet place of remembrance. I was struck by the unusual lighting made out of shell cases. 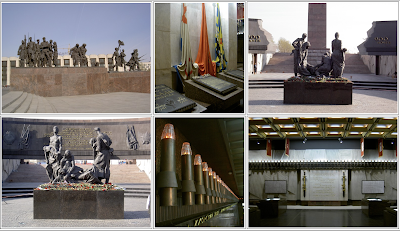 And finally three pictures of artillery pieces. Two  are from the truly fantastic St Petersburg Artillery Museum. The remaining picture was taken on the West of the city at the point where the siege lines were closest to the city centre.

Just stepping away from all things military for a moment - St Petersburg is an astonishing city. Beautiful architecture, terrific museums, vibrant streets and proud people. It could have been so very different had the local populace not held their collective nerve during the war years. As one elderly resident told me "I never doubted that the city would survive. Those that did 'let the lamp of hope go out' didn't survive"