Leningrad (St Petersburg) - A Trip to the Battlefield - May 2006

This story must start with an acknowledgement of the horrendous suffering borne by the people of this remarkable city from 1941 through to 1944. One of the victims from the siege was called Tanya Savicheva and her iconic image can be seen throughout the city. Her journal is kept at the St Petersburg Museum of History. My friends Natalya Makeeva and Katerina Stepanova translated some passages for me. The journal has been transcribed onto a powerfully evocative memorial which can be found near the start of the 'Road of Life' to the East of the modern day city. 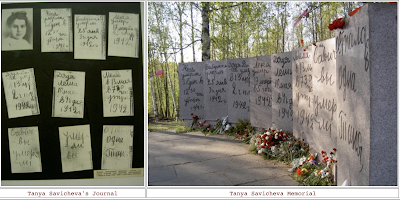 Of course, many people survived and it is a credit to the modern day city that their sacrifice and achievement is still acknowledged today - in particular on Veterans day when the survivors parade through the city.