A weekend in Prague brought an unexpected opportunity to visit the 'National memorial of the Heydrich Terror'. The shrine is located in the crypt of the Orthodox Cathedral of Saints Cyril and Methodius, Prague. The photographs on this page were taken at this location. 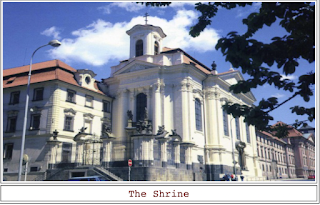 Reinhard Tristan Heydrich was born in 1904 in Halle; his father was a musician. Heydrich started early to have contacts with extreme right organisations and was fascinated by the racial ideology. In 1922, he joined the Navy in Kiel, but was being dismissed for disgraceful behaviour - he had a love affair with the daughter of a naval officer. In the same year, he became a member of the NSDAP and SS and was promoted by Heinrich Himmler. Already in July 1932, he was SS-Standartenführer and headed the political department of the Munich police department since 1933 as SS-Oberführer.] 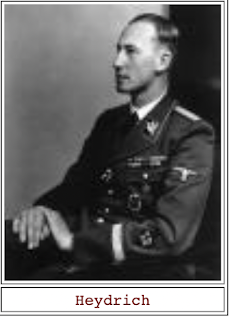 Between 1933 and 1934, Heydrich was in charge of the unification of the political police. In 1936, he was made chief of the Sicherheitspolizei ("Security Police") and the Sicherheitsdienst for the whole German Reich. Three years later, Heydrich took charge of the "Reichssicherheitshauptamt" (RSHA, Department of Security), which linked the department of security (secret security police and criminal police) and the NSDAP- department of security, after Himmler's orders to this effect. The RSHA was responsible for all official and secret police and security departments in Germany. Participating decisively in the planning and realization of the "Final Solution", Heydrich ordered the "Concentration" of Polish Jews in ghettos and the organisation of mass deportations from Germany, Austria and those parts of Poland which had been incorporated to Germany to the so-called "General Government". 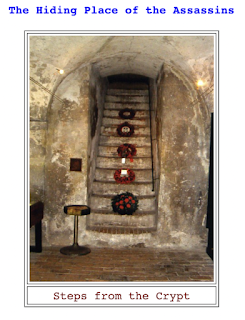 How was Heydrich Assassinated?

In 1941 and 1942 small teams of Czechoslovak parachutists were trained at Cholmondeley Castle and Park in Malpas, Cheshire, UK. These teams were dropped into Czechoslovakia to organise the Czechoslovak Resistance and to orchestrate the assassination of SS-Obergruppenfuhrer (group leader) Reinhard Heydrich who was the Nazi in command of this area. His savagery and ruthlessness in suppressing the population earned him the name of "The Butcher of Prague". With the support of other small groups of parachutists dropped later, plans were laid to effect the assassination, with the knowledge and support of the exiled Czechoslovak Government in England.

Heydrich was, unusually, late, but an hour after the expected time, Valcik and Opalka gave the signal that the German staff Mercedes car was approaching. The spot had been carefully chosen at a point where the vehicle must slow right down to negotiate a very steep turn in the road.

As the car approached and slowed, Josef Gabchik snatched aside his overcoat, lifted his concealed Sten gun and clicked the trigger. It failed to fire. The surprised Germans, believing Josef was a lone assassin, reacted quickly, braking to a stop and reaching for their weapons. Jan, realising that Josef's gun had misfired, hurled a grenade which exploded against the right rear wing of the Mercedes car, puncturing the tyre and blowing a large hole in the bodywork.

The explosion and grenade fragments severely wounded Heydrich. Both Germans opened fire with their pistols, and the Czechs fled, Jan injured in the head and face by splinters from his own bomb. He was compelled to force his way through Czechoslovak witnesses, some of whom, uncertain of the events, tried to hinder his escape as he fled, waving his pistol, shooting into the air, and hiding his face and injuries.

Ironically, Heydrich had only a day or so before ignored a directive that his limousine was to be fitted with armour plate to its bodywork and seats, as he believed that the Czechs had abandoned resistance and that he would soon be recalled to Berlin and assigned other duties. He wanted to assume military control in France. 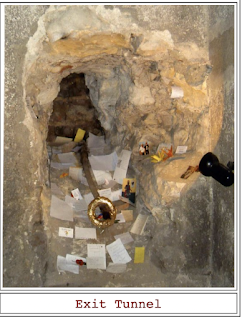 Who were the Assassins?

Jan was armed with a specially modified Type 73 anti-tank grenades and Josef with a British-issue Sten gun. Both also carried .32 Colt automatic pistol. Lookout was being kept by Valchik and Opalka.

The seven parachutists including Kubiš and Gabèick were hidden in the crypt of Prague’s Orthodox cathedral of Saints Cyril and Methodius (see photographs). Karel Èurda, one of the Czech parachutists caved in the face of the daily executions and informed the Nazis of his compatriots’ whereabouts. At 04:10 in the morning of June 18, 800 men, including Gestapo and SS soldiers were deployed against the seven. The Nazis attempted to storm the church, to smoke them out and to flood them out, but the seven men held out until 07:00 when Kubiš and two others died defending the nave. The remaining four fought from the crypt and finally used their remaining bullets on themselves.

What Else had Happened After the Assassination?

SS-Oberscharfuhrer (Sergeant-SS) Klein, the uninjured bodyguard / chauffeur, was a formidable man. Opalka and Valcik escaped unnoticed; Jan escaped in one direction on his bicycle and having abandoned it outside the Bata shoe shop, was able to find sanctuary with the Novak family, a safe house. Heydrich, who had pinned Josef down with pistol fire, slumped against the bonnet of the car, too wounded to continue the fight, and ordered Klein to pursue Josef. A Wild-West type running pistol battle ensued during which Klein's automatic pistol jammed. Fighting at close quarters, hand-to-hand in the doorway of a nearby butcher's shop, Josef wounded him in the thigh and ankle, and was able to escape.

Heydrich's spleen had been fatally damaged and he had contracted blood poisoning from grenade shrapnel, seat-spring splinters, and horse-hair filling of the car's upholstery. He was taken to the Bulovka Hospital and treated by a German doctor who declined to remove his injured spleen, preferring to administer experimental drugs. These were unsuccessful and ten days after unsuccessful surgery, Heydrich died, in great pain. He was laid in state on the forecourt of Hradcany Castle before removal to Germany.