Namibia - A Trip to German North West Africa in 2006

A fantastic family holiday in Namibia. Maureen and I flew into Windhoek snd drove off into the vast open spaces of this wonderful part of the world. Surely here in this sparsely populated african country there would be no unscheduled detours to battlefields? Wrong! There is always something to see if you look hard enough.

We were only a couple of days into the journey, on our way down to Fish River Canyon when we came across the settlement of Gibeon. A handful of buildings on the edge of the Kalhari clustered around a railway halt.
The South African Army rallied to the support of the mother country at the start of the great War. The German colony of South West Africa lay to the north. It was here in Gibeon, on the 25th April 1915 that Botha's three South African columns caught up with the German rearguard. After a stiff fight German resolve was broken and this small scale battle effectively ended German hegemony in what is now called Namibia. 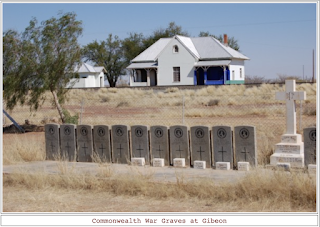 The cemetery is situated next to Gibeon Station and most of the graves date from 27th April 1915. There are 40 South African casualties interred here along with a number of Germans. Memorials to the German dead and the Natal Light Horse have been erected. Unusually one German monument is inscribed with the words 'Fur Kaiser und Reich'.
Watch out for snakes and scorpions in the long grass!

Amongst the South African casualties there are two personalised monuments. On the left below is the grave of Major John Robertson Watts of the Natal Light Horse. Aged 49 and the son of Thomas and Mary Watt from Glasgow, Scotland. On the right is the grave of Private Charles John Henthorn, Natal Light Horse. Aged 30 and son of Stephen and Mary Henthorn from Melbourne, Australia. 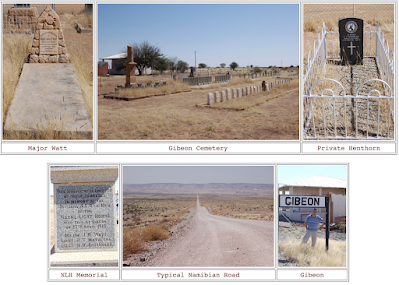 Much further North, in an area rich with wildlife and somewhat greener than the sun blasted South, lies the town of Omaruru. In 1904 the Hereo tribe rose up against the German occupiers and the town was besieged. The commander, Captain Franke, was out of town at the time. On hearing the news he marched 900 km in 20 days and broke the siege by a cavalry charge. In 1907 the Franke Tower (below) was built to commemorate the victory. 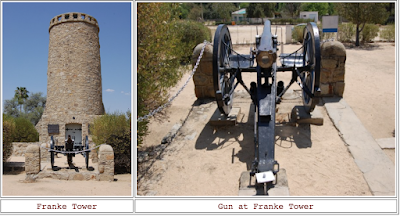 The battlefield is marked and was declared a national monument in 1963. The local cemetery contains a few German graves including Josef Ziegelmeyer and Bruno Henschkel (shown below). 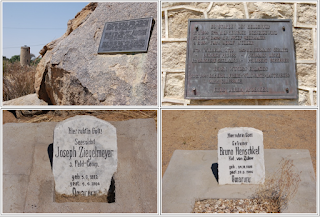 To the West, on the coast, the coastal town of Swakopmund retains a very German feel with its ex colonial buildings. Here you can find the impressive Marines Memorial (centre below) and a very ambivalent war memorial (left below) commemorating both the first and second world wars. It feels very German notwithstanding South West Africa's allegiance with the allies in the 1939 to 1945 conflict.

My thanks to Major Paul Naish (Retired) who arranged the logistics for our trip and was an endless source of advice and inspiration.
Posted by Curmo at 08:17