Today you can reach Rome from Cassino in about 1 hour and 30 minutes on the Eurostar. In the spring and early summer of 1944 it took the allied forces almost six months to travel the same journey. The price that both sides paid was high. Allied losses of 40,000 and German fatal casualties of 25,000.

As the train approaches Cassino from the north, the Rapido Valley narrows into a thin strip of land with the whole landscape dominated by the Benedictine Abbey, high up above the town. Looking at the local topography it is immediately apparent why this strategically important bottleneck was to become the key point in Kesselring's Gustav Defence Line. It was here that kesselring had placed one of his most able commanders, Major-General Richard Heidrich, and the 1st Parachute Division (albeit initially in reserve). 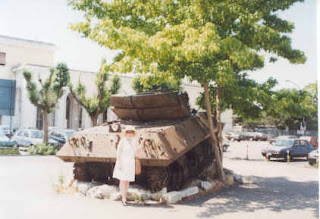 Outside the railway station an American M10 tank destroyer sits under the shade of a tree in the centre of a roundabout. It is a quite spot and the tank seems strangely incongrous in this small provincial Italian town. Negotiations start with a local taxi driver. It is a Sunday, there is no public transport and the streets are empty. We agree an itinery, a price and we are on our way. But before we start, a walk into town.
During the first stage of the battle the U.S. 34th Division had lost in excess of 2,200 men forcing the first bridgehead over the River Rapido. The 34th and 36th U.S. Divisions were decimated during the early days and this had left Clarke's Fifth Army in a bad way. Cassino Town is all modern blocks. The town having been obliterated by Allied bombing. Tucked away in the centre of a "down at heel" shopping centre there are a number of U.S. military artifacts in a small memorial park.

The Allied Commonwealth War Graves Commission cemetery at Cassino lies in the valley, about two miles from the town. The lines of headstones are dominated by the hills behind, and in particular, the monastery above. Prior to the monastery being bombed by the Allies, Gunner Dougas Lyne, aged 20, of the 57th Field Regiment, described it thus. "It was rather like seeing Buckingham Palace in the middle of Passchendaele. We saw this monastery all the time, and it got on our nerves, to be quite frank. it became, from being a thing of beauty, a thing of monstrosity - an excrescence - and somehow it was the thing which was holding up all our lives and keeping us away from home. It became identified with all the things we detested."

The Allied CWGC has an Eastern feel to it. Pagodas and water reminiscent of the Far East or India. Very fitting given the number of Indian, Gurkha and Kiwi troops buried there. The German cemetery lies about eight miles North East of Cassino. A small hill has been turned into a Memorial Park. The graves are arranged in circles and one reaches them by passing through an ante chamber which houses a haunting sculpture of grieving parents. On top of the hill is a huge metal crucifix and four fluttering flags. Including that of the European Community.

The road winds up and up and up. And then, high above the town and in the shadow of the monastery, one comes across the breathtaking Polish Cemetery. High on the hillside, scored into the earth. The Poes had fought a last, desperate battle with the German Paratroopers on the 16th and 17th May 1944. At 10:30 am on the 18th May the Polish flag was fluttering above the ruins of the monastery. Thus the Poles answered Stalin's accusation that they would not fight. The photograph below shows a Polish headstone covered by a Polish flag with the reconstructed monastery behind.

The Monastery itself has been reconstructed brick by brick, stone by stone. It is a quiet and tranquil place. The only clue to it's destruction and rebirth being the odd yellowing postcard and a roon full of relics retrieved from the battlefield. The view from the top - Stunning, an artillery spotter's dream. For those in the valley below, in 1944, a nightmare and a final resting place. 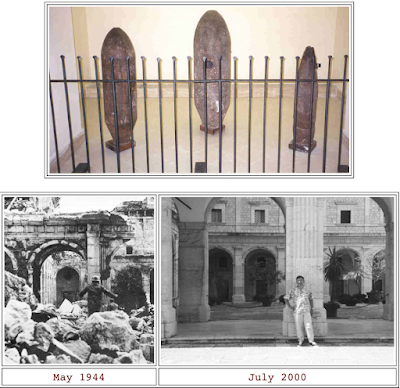